March 06, 2015
Sethji is a story of Amrita, a dark but sexy lady. The central theme of the novel is – passion for power. When Amrita’s father dies, she erratically plunges into a state of social rejection and financial difficulty. To overcome all types of financial difficulties and in the quest of social security for Amrita and herself, her mother remarries a Delhi-based businessman and they settle in Delhi. 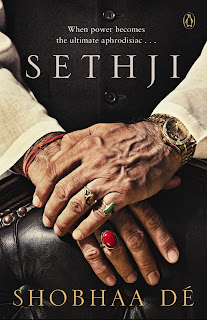 In Delhi, Sethji, an egotistic prominent political figure and once a friend of her father, approaches her to marry his elder son, Srichand. Though initially she protests but her widowed mother forces her to tie the knot, as a result Amrita gets entry into a wealthy family and her mother’s life standard rises eventually.

Sethji’s both sons are hopeless and act like crazy, dodgy villains. The elder one – Srichand – husband of Amrita is unable to drive her crazy in bed as he is impotent. Amrita has access to immense wealth and affluent facilities but her most prized gift eludes her.  Sethji is aware of her situation and he deliberately brought her in his home in the guise of marriage to his son. He longs for her body and tries to approach her on various pretexts. When Suraj (the younger son of Sethji) rapes a hilly girl, it is Amrita that neatly handles the media and saves the reputation of Sethji being tarnished. Sethji discerns the power and charm possessed by Amrita but inwardly doesn’t accept her as his daughter-in-law, for him she is a fine, intelligent whore whom he exploits for his personal gains, but at the same time he is ready to give her everything which she cannot achieve had she been married to some other house or her ex-lover, MK.

On account of some political rivalry, Sethji and Amrita are kidnapped and transported to Mumbai. At this point, she takes help of her ex-lover, MK, who sets them free and back to Delhi. However in the struggle, Sethji looses both his sons but Amrita also manages to get the kidnapper killed. In Delhi, they live and love together. Sethji prepares to hand over all his power and wealth by introducing her in the mainstream politics. However, in return he asks for her soul and body.

Throughout the novel Amrita couldn’t live for herself but by acting as an object for others she eventually masters her fate and achieves the power by means of her sexuality.


On a brighter side, Sethji focuses on the darker side of urban elite people who can go to any extent so long as a person is an asset to them.