Book Review: A Song in the Morning by Gerald Seymour

January 13, 2015
A Song in the Morning is a classic, adventurous novel written by Gerald Seymour, it was first published in 1987. That time South Africa was in the clutches of England. So prevalent there, was direct colonisation, policy of apartheid, and politically butchery of English diplomats. 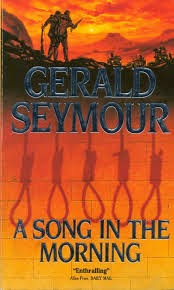 A Song in the Morning is a fine book, a looking back at the suppressed South Africa. Then, Great Mandela was also alive and the song was something like ‘Amandla’. In the background of the book the fight is between Blacks and Whites, a superior race they think of themselves. The novel ends on an emotional note when the injured Jack Curwen with this lately released father, Jeez Curwen, sat on the mountain waiting the cold night to pass off, in the morning resumes gun-battling and approaches a certain death.

Jack’s father (Jeez Curwen) joins ANC (Anti National Congress) as an undercover agent but lands up in the prison for twenty long years, oblivion to his 2-year-old son and the wife. After release Jeez Curwen was found driving a cab which was involved in a bomb attack. So, he gets death sentence. Though, intentionally he wasn’t involved in it.

Over 20 years Jack Curwen lives alone with her mother, without father. So after 25 years, when he learns about his father’s death sentence on a foreign soil, he rushes to save his father. By using his professional techniques of home demolition, he breaks the walls of the prison. Sets his father and four more blacks’ free but in the process he gets hurt and could not leave along with others.

He sees his father first time, while seated on the mountain top they exchange their lives’ stories all night. In the morning they, already being surrounded by army, descend down the mountain and die with a pride in eyes rather surrendering themselves for a next day hang.

The novel is well placed with political drama and has all ingredients to capture readers’ imagination and interest. A deserving book! A master piece thriller!