January 27, 2015
River God by Wilbur Smith is a masterpiece. Perhaps, no other writer knows and writes about Africa the way Mr. Smith does. River God is an epic historical saga through the eyes of a very talented eunuch slave - Taita. The story of the novel hails from the ancient Egypt, around 1780 BC. Wilbur Smith asserts that the story in River God is real and based on the found scrolls at the Temple of Karnak in 1988. The river Nile plays a crucial role in providing major climaxes in this sweeping story. Thus, the title ‘River God’ is veracious. 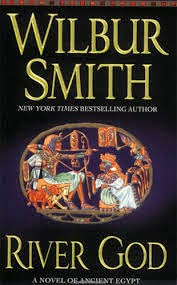 The novel opens with knowledge that Taita is a trusted slave of Grand Vizier, Lord Intef, father of queen Lostris and an enemy to Tanus, the lover of Lostris. When Taita is young the ancient Egypt (during the tenure of Pharaoh Mamose) sets on a decline. Taita being a doctor, advisor and future-teller witnesses a long stretch of time with many events such as marriage of Lostris to Pharaoh; comeback of Lord Tanus to the kingdom; end to Lord Intef’s brutalities and the invasion of Hyksos on Egypt. Under Tanus’ leadership, half of the Egypt is lost to Hyksos. Then, after 20 years, Pharaoh Memnon (the illegitimate son of Tanus and Queen Lostris) makes a princely comeback and seizes back the Egyptian Kingdom from the clutches of Hyksos.

The novel achieves an emotional grip when Lord Tanus dies in an attempt to seize a Blue Sword, and following his death Queen Lostris slips in the hands of death. Throughout the story Lostris and Tanus remain lover, at times distant ones, but they could never come together officially. The only knower is the slave, Taita. Queen Lostris has strong liking for Taita and she knows he loves her but he's only a slave, after all. So, she says before dying, “Perhaps in the next life, the gods will treat our love more kindly.”