January 02, 2015
The Melodeon is a great novella by Glendon Swarthout. The settings of this novella conjure up remote farms of Michigan State during the Christmas season. The book notches limelight as it shows the period of the great depression of 1930s. The story is about charity during rough times, a small boy James whose grandparents donate their family heirloom ‘Melodeon’ to a local church when, in fact, they have nothing for each other to share. 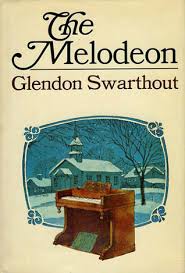 The melodeon of this story was bought as a present by Ephraim Chubb for his wife Sarah on the occasion of in 1863 when he left home to fight for the North in the American Civil War. Ephraim intended the melodeon to keep Sarah’s company until the day of his homecoming.

How mysteriously he came home many, many years later than he supposed is here recalled by his great grandson, James Chubb, in a tale that is as remarkable as it is charming, warm and entertaining. It all took place when James was just a boy on a cold and snow-driven Christmas Eve in the depressed 1930’s, the night his grandparents chose to donate the melodeon to the local church.

The Melodeon is a short novel but an expertly written book throwing focus on many human values such as charity, reunion, love, next-generation concern, and family sentiments. This is a novel of extraordinary courage and remembrance. It is set during a particularly cold and bitter Christmas Eve, a night when, for a small boy, the mid-winter birth of a lamb is perhaps the less strange of two apparently miraculous events. The other concern’s his family’s melodeon, a much cherished heirloom through which past, present and future suddenly seem to meet. In this cherishing story, Glendon Swarthout has merged action and poetic vision into an unforgettable tale of compelling beauty.