December 13, 2014
After ‘Swami and Friends’ and ‘The Bachelor of Arts’ came a masterpiece ‘The English Teacher’ in 1945, by R.K Narayan, the third and final one of this series. The book is based on common but riveting theme – conflicts of characters. It is a super-class novel for all sorts of readers. In fact, the only writer of India, of whose books can be enjoyed equally by both parents and children. It’s an incredible feat so far, remained untouched. 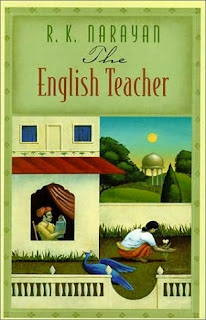 Krishna is an English teacher, who is unhappy with his routinely life. Hence, he always conflicts with his inner desires and much more into retrospection. The advent of his wife and daughter alters the course of his life outlook and he began towards a different experience. Krishna understands while living with family that his life has some meaning, it is not just the way he assumes often. He is more into quest for himself and obsessed with personality development.

Following the death of his wife, a melancholy period ascends over him, to an extent he thinks of committing suicide but on account of some guidance by a stranger saint he instead makes his journey into spiritual findings and finally manages to feel connected with her passed away wife.


The book is significant with its unique meaning and having concerned about a social message, it is a classical piece of writing from a very revered writer R. K. Narayan. The nature of the book is subtle autobiographical, but the settings and circumstances entwined in this book are outstanding and beyond the just fiction.