November 28, 2014
Jani only knows one person in her life while sustaining a harsh life in the adverse terrains of Tibet. And that person is Sembur. They both live far-off from the civilized world for more than one reason. Sembur isn’t her father but a well-wisher kind of guardian. Without getting the hints of change, they encounter a young but arrogant army captain from Ghurkha Rifles. To Jani that captain sounds like a Mister, so she addresses him Mister. The captain is seeking a person wanted for murder ten years ago. And that wanted person or criminal is none other than Sembur. However, while descending towards the plains of the colonized India, they all struggle against the odds of the Himalayan winteriness. Sembur dies of heart problems, leaving the captain to take care of the girl who soon becomes sick with diphtheria. 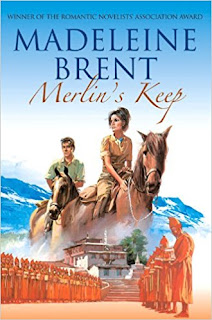 By implementing great courage and patience, the captain manages to save the girl from the obstructing mountainous hardships and sends the girl in a hospital in Gorakhpur. After recovering she is sent to the Army Widows and Orphans Society in England, with a new name of Jane Burr – daughter of Sembur. After five years, Jani is taken as a protégé of Eleanor Lambert in Merlin’s Keep, where Jani is both companion and secretary to her. They both have strong affection and deeply care for each other. When Eleanor goes for vacation she returns married with a silver guy, who practices black magic on her. And Jani discovering that resumes her struggle to save Eleanor from the hands of the Soul Eater – the silver man.

However when she is alone in the home, one day she discovers a letter written by Sembur which explains about her birth details, the history of her parents as well their deaths. She discovers that her mother was an Indian maharani and her father an English colonel. They were the crown holder of Jahanapur, an Indian state. Thus, she is half caste and also entitled to that princely state. The letter also proves that Sembur was not the person behind their deaths hence he should be absolved. She also begins her search for the army captain who once had saved her life.

In the end, Jani, who prominently struggles a lot to make her living but saves her friend from the soul eater, emerges as the princess of an Indian province. She gets her deserved love too, and the story sees a happy ending! It’s a good and smooth read, like a fairytale.


Unlike Arthurian or medieval romance, the book has to tell a tale about ‘gothic-kind’ of love story, truly gripping and so true like a childish dream, innocent yet pure. Another surprise is that Madeleine Brent is a pen name; the original name of the author is Peter O’ Donnell.