November 23, 2014
R.K. Narayan’s ‘The Guide’ is considered a representative novel which brings forth the incompatibility of interests of human beings who are ironically brought together by fate. The triangular love story presented in the novel tends to be tragic for all the main characters of the novel. 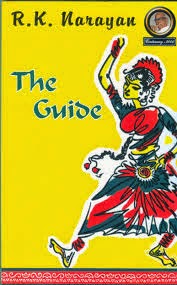 The hero of the novel, Raju, is popularly called ‘Railway Raju’ because he serves railway passengers as a tourist guide, and his career has flourished quite successfully. The turn of events takes place when Marco and his wife Rosie arrive in Malgudi. Marco is an academician obsessed with his fresco hunting in ancient caves. He does not pay much attention to his wife. He does not even consent to her organizing the art of dancing which he looks upon as a deplorable activity. Raju is employed by Marco in his professional capacity to show him the caves in and around Malgudi. Marco gets too busy studying. The young guide finds that he gets ample opportunities of spending a happy time with the young dancer Rosie whom he flatters cleverly. In fact, he is infatuated with hero Marco comes to know of their relationship, disowns his wife and returns home.

Here onwards, Raju becomes Rosie’s guide and sets her up as a great dancer and eventually a celebrity. As money pours in, Raju takes to luxurious living, and get involves in gambling and drinking. Gradually, Rosie loses her interest in her art for which she had craved so much initially, quite fed up with her circus existence.

A crisis reached when Raju forges Rosie’s signature in connection with the release of a jewelery box from a bank since it is in joint names of Marco and Rosie. Raju is prosecuted and lands in prison with a two-year’s sentence.

On his release from the jail, he takes shelter in a village temple where the rustics take him to be spiritual guide. Progressively, he actually begins to believe in the role which he has created for himself. To start anew, he feels compelled to observe a twelve-day fast as a kind of penance. A large crowd gathers to show their reverence to his Swami, for the first time in his life he feels a peculiar strength within him.

Narayan seems intensely aware of the way in which human relationships develop. They can develop, improve or degenerate depending upon the circumstances they come in their life.