Wildlife filmmaker Daniel Armstrong and his childhood friend Johny Nzou shoot the mass slaughter of elephant herds to raise money for wildlife conservation and protection. The ivory collected from the mass killing is sent to the government warehouse, in the custody of the chief warden, Johny Nzou. However, soon, a team of poachers kills Johny Nzou and his small family to take away the government-protected reserve of ivory. Behind the theft and murder was Nasty diplomat Cheng’s greedy trade motives. So, Daniel vows to take revenge of his friend’s death. 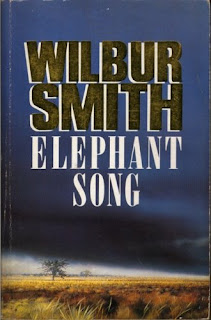 Later, Daniel gets an assignment to shoot for a green initiative in a small African country, and Cheng is the director of that project. So, here is the bright chance for him to trail the murderers. However, things go wrong and to save his life Daniel escapes to England, where he meets anthropologist Kelly Kinnear, who is equally against the project’s investors as she knows in the guise of a green project there ahead lies the rape of the country. To get to the events other way round, Daniel and Kelly join the gang of the former president to fight against corruption and his personal enemies.

Elephant Song is truly a tale from Africa, every page points to the grim realities of the African lives, especially Bambuti tribes (referred in this book).  And Wilbur’s writing style in every sense makes him a true deserving native of the African soil.