Book Review: All Quiet on the Western Front by Erich Maria Remarque

October 14, 2014
Unlike popular war fictions, All Quiet on the Western Front by Erich Maria Remarque is a straight book focusing the harsh realities of war and the conditions which people or soldiers endure. 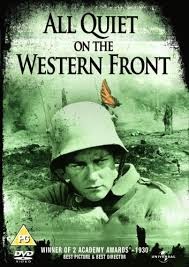 Paul, a German soldier, is sent to war to fight against France in World War 1. Paul, like his other friends, is of opinion that participation in a war, as a soldier, is a matter of glory and reputation in his country but soon his perceptions about war glory changes when he witnesses young men dying around him day in,  day out, including his school friends.

Further, the book covers many essential aspects of wars, like the violence and terror generally spread by war. And it is strange to know in war people do not die a simple death, even death patterns are different and dreadful.

During his tenure he meets a group of French girls for fun and sees Russian prisoners with no different mindset and he also kills a French army man in a trench.

Paul while fighting develops a fatigue and contempt for politics, he believes that war is actuated by old people (politicians), however they send young men, students like him, to fight and die first. When Paul comes back home on leave, he is unable to restore his life with simple peaceful aspects. He develops a war-related mental disorder where he always wants engagement with dreadful surroundings and blood.

The book is an extraordinary effort against the war. It was originally written in German. War fiction league can never absorb this timeless book. It is so pure in its essence.