September 21, 2014
At one point the book looks highly influenced by Hindi movies of the 1980s, but as you go on reading, the difference that follows make readers believe that the story is a different one and is here to tell a different tale. 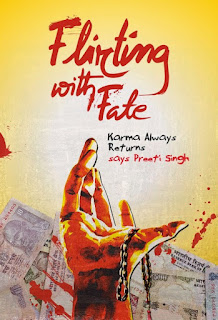 The book is highly exploring in nature. It does so by taking deep insights into the society of India and of course, human nature that can never be devoid of desires and episodes of hedonism. Sometimes the characters are meek, while other time they become frenzy about circumstances, and like many of us – they do try to change their fate, but Tit for Tat is the perfect suit.

Many readers can positively feel that the writer Preeti Singh is a religious person – as it is being reflected in her debut novel, ‘Flirting with Fate’. The core theme of the novel is karma (human actions), along with auxiliaries themes like social reclusiveness, lust, evilness and hunger for love and materialism. So, here, the protagonist Anand is a good chap, initially, a boy being abandoned by his parents. A versatile personality but eventually becomes a camouflaged one.

With forces of life he turns out to be a rogue man in later years of his life, in his youth. He plans murders, commits rape and other many evil offences, but still his wrong doings return to him fatefully.

The book is a social mirror, unlike boring love stories. The writing notes and style of the writer are simple, yet convincing. Usage of Hindi dialects piques, but fine after all. It’s an award winning book - The best crime thriller for the year 2012.