The novel – Untouchable needs no introduction for an Indian reader because its background is well known to him.  The very title is a telltale.

Humanism, which is the key concept of his novels like Untouchable and Coolie, reveals man’s essential dignity and nobility. According to this approach to man – man is the creative source of infinite possibilities. Mr. Anand is a humanist who reveals the essential dignity of the underdogs of Indian society. Anand in all his novels emphasizes the fact that nobility and dignity are not the monopoly of the rich. The poor have their greatness, honour as well as the richness. This humanism is the central theme of his novels. His humanism justifies that man is man, be he a sweeper, a prince or a coolie. 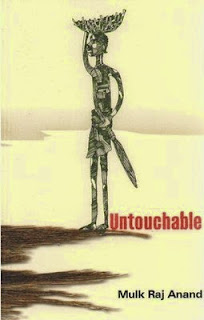 The novel Untouchable has the confrontation between tradition and modernity. Anand realized that much in the Indian tradition was obsolete and meaningless. Tradition might have its utility when it began as a new practice. But in course of time, it lost its purpose and became an obstacle to progress.
Anand suggests that modern methods be adopted and the evils would die a natural death. For example untouchability, originated in the past, then there was need of it, but continue to present, when it is doing so much damage to the society. It is against the spirit of democracy. In modern perspective Gandhiji made the greatest possible efforts to eradicate it and gave the title to them – Harijans, the servant of the God. Anand also pained to see that even the basic rights of man are denied to them and out of sympathy for the oppressed – the down trodden – that Anand turned to fight a battle for them.

In the novel Untouhable, Anand not only presents the problem of untouchability but also exposes injustices and inhuman treatment, the degrading humiliation and cruelty. In fact, in the thirties, Indian society was in a state of transition, there was a clash between tradition and modernity and this transition is one of the themes of the novel. The theme of the novel has been studied through the character of Bakha who is caught between two worlds. Though the pulls of modernity were strong upon him, he could not break tradition. There is clash inside the platform of his souls. He becomes a representative of a society passing through transition. He is not ready to accept his traditional place in the society. Hot angers burns within him. He is purring with the desire to change the existing order of exploitation and injustice but, the severity of centuries, which is ingrained in him, paralyses him even when he vaguely thinks of retaliation. Accidentally, when he touches a man and pollutes him in so called way, a crowd gathers around him to beat him.

On the other side of the picture, Bakha’s father and brother harbor no resentment against oppression and injustice. They are the representatives of forces of tradition, orthodoxy and conservatism, whereas Bakha stands for social change, for transition from the old to new in fact he has caught the glamour of the Whiteman’s life. He wants to be a White Sahib.

The writer has depicted an overall grip on the problem of untouchability. In nutshell it can be stated that the theme of untouchability is very realistic and fit for naturalistic fiction. The high point of the novel is when Gandhi speaks out against untouchability, but praised the humble origin of the untouchable making him a man of God and denouncing those who believe that because of his caste a man is polluted and can pollute others.