May 07, 2014
Burial at Sea is a hastily written novella by Khuswant Singh. The story is staged against the pre- and post- independence backdrop. Mr. Mattoo introduces his son, Victor Jai Bhagwan, to Mahatma Gandhi. And soon, he becomes one of the brilliant students of Gandiji. Victor is ambitious but at the same time sounds contrary to Gandhian thoughts, thus there is always a rift between the both. After a successful academic stint in England, when Victor returns India he opposes the idea of freedom for India, and also wants to bring India at a global level by establishing number of industries. Thus to start with he sets up a textile mill around the Yamuna River and further in a very short span of time he establishes many other niche industries and becomes one of the leading capitalists of the country. 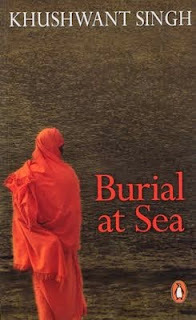 On the behest of his parents when he gets married to a simple lady his life takes a dull turn, subsequently he takes his wife as a sex toy. While giving birth to a baby girl, she dies. Thereafter, he never marries but takes great care of his daughter, Bharti. In Bombay, he spends much of his time in his private yacht Jai Bharti, which is named after his daughter.

During vacationing in Hrishikesh, Victor comes across an enigmatic tantric lady, Maa Durgeshwari. With this lady he indulges into tantric sex flings and on the other side his daughter Bharti loses her virginity to Nair abroad, he is a Victor’s friend who later turns against him. Not only this, next Bharti falls for a yoga Swami, who was set up by that tantric lady. Since the advent of Maa Durgeshwari, Victor’s fall rises up. Many people turn against him, including friends, and labour unions go on strikes. When Victor slaps the union leader, he vows for the revenge. In the next instance Maa Durgeshwari complaints of pregnancy which makes Victor to shrink back and he craves to end the relationship with her. Within a few days Victor is shot dead but before the death he wished his ashes to be scattered in the sea from his sanctum, his personal yacht, Jai Bharti.


Burial at Sea is an ordinary book, for it doesn’t highlight any special theme or purpose. Unwanted sex scenes make this look bleak of intensity and proper plotting. The first half of the book is interesting but as soon as the book on-boards the characters like tantric woman, and Swami, it begins losing all its so-far gathered patina.