Douglas Misquita is famous for writing action thriller novels, where he sketches characters that are often larger-than-life who, in return, offer immense action and adventure. Following James Bond movies and Douglas Misquita characters is one and the same thing. Anyway, this is my second book from the author. Previously, I had read Spectre by Douglas Misquita (A Kirk Ingram). His books are tough to read but they give different-level ballast. 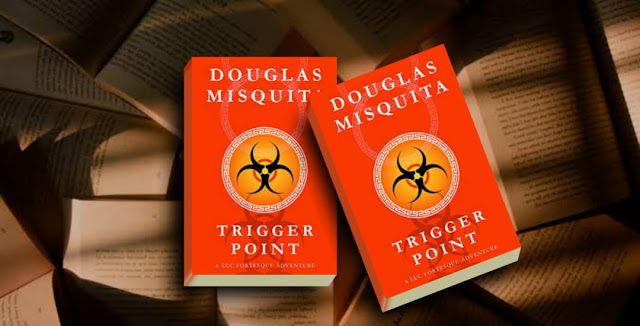 The good thing about Douglas Misquita’s novels is that they are character based. For example, Trigger Point is Luc Fortesque book. This character from Mexico, most of the time on-the-run, is an obsession to follow throughout the story. He is one more ‘larger-than-life’ character with some amazing and incredible sweeps. Not only this, there are many more auxiliary characters that keep popping and go down with the time. I loved the equal yet tender balance between protagonists and antagonists in his novels.

The story of the novel has its own expanse. The story is multi-layered, set amidst various countries like the UK, Mexico, Iraq, China, Africa, France, and more. The book is full of Historical sweeps and back stories, especially of European countries, and how that sweeps impact the characters. This is not a simple action and adventure novel, it has bundled up many things happening across the world, but they may be related to one big event and there is one man who can either stop or alter something inevitable. Yes, you heard it right….one man. And that is Luc Fortesque.

In a broader sense, the story is about ‘Apocalypse’ – a sort of bioweapon. It can be used to destroy the world and whosoever gets it, probably can rule the world. This deadly bioweapon has been stolen from the vault from one of the strongest countries of the world, which is also an arch rival of the USA or say the West. The world’s secret agencies are searching for Luc Fortesque. Some wants to use him, a few might want him dead for his past sins. Will the world get over by this Apocalypse or someone like Luc Fortesque can save it? If you go deep inside the novel, you will have your answers. Remember this is the second book in the Luc Fortesque series…if you read previous two, possibly you get all your answers along with introduction to a lengthy cast of characters.

On another façade, the bioweapon is linked with religions. The author has portrayed subtly how religions are affecting and ruling the world. There is a secret spy agency of Pop, and possibly Mossad, and Nur-ad-Din from Iraq, waging Jihad against the West, and much more. As the story chugs ahead, you get under the skin of it, you realize that you have got something that you cannot put down. The novel is brimming with weapon trade, religious bigotry, warmonger, intriguing weapon details, action, escapades, abductors, strange ideologies and cultures and their allied war ways.

Douglas Misquita powers its readers to go deep and investigate the cause of conspires and murders. It is a contemporary novel, in between kept some Indian characters running the backdrop for credibility, such as Aruna Roy caught in the Paris Catacombs while partying in The Respect for the Dead. She finds something unusual while surviving herself that can have the effects way mortal than anticipated.

Having said a lot about the book and its pros, there are some cons as well. First, though the narration is engaging but long-worded sentences fluctuate the reading pleasure. There are too many action scenes, probably that was not needed, every time and for each character. Well, the novel sounds like a Hollywood action thriller but finally it’s the words that are going to paint the mind of a reader. Secondly, the length of the novel stretches over 400 pages. It could have been managed within 300 pages. Otherwise, it is a way great novel for its genre, and for compulsive and fast readers… an amazing read.

October 01, 2018
Poem by Rabindranath Tagore: Where the mind is without fear and the head is held high Where knowledge is free Where the world has not been broken up into fragments By narrow domestic walls Where words come out from the depth of truth Where tireless striving stretches its arms towards perfection Where the clear stream of reason has not lost its way Into the dreary desert sand of dead habit Where the mind is led forward by thee Into ever-widening thought and action Into that heaven of freedom, my Father, let my country awake. Short Summary: This poem is written by Rabindranath Tagore during pre-independence days, when India was a colony of the British. The underlying theme of the poem is absolute freedom; the poet wants the citizens of his country to be living in a free state. According to the poem, we see that the poet is expressing his views there should be a country, like where people live without any sort of fear and with pure dignity…they should
8 comments
Read more