February 05, 2020
I found Spectre by Douglas Misquita more than an action thriller. There’s sweeping account of naturally gifted people, ethereal and supernatural forces, shuttling between two poles-apart timelines, and of course not to forget the fascinating ancient and the modern Rome, and slices of early history whenever the story transports to Christian era. 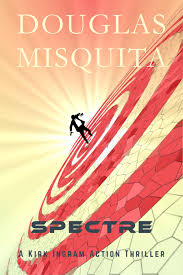 The novel is more to its semblance. Yes, in the novel action abounds but the tightrope of religious beliefs in the CE, the miracle of that Rabbi, Axium flight 2315, the secret of Jovanni Rossi’s mother, the untoward yet enigmatic personality of Kirk Ingram – all blends so perfectly and finely that one could hardly feel the jolts as the novel shuttles between two parallels. Douglas Misquita is a promising author from India (I came to know this quite late.) His caliber as a writer is matchless as the likes of Dan Brown James Rollins, Grant Blackwood, and Steve Berry. I loved his pace and narration and blending of one aspect into another.

So, what’s in the story? It is a multi-faceted one, but the main character Kirk Ingram is the major honcho. The modern story is filled with his pack of adventure and action. The novel starts with a slice of ancient civilization when somewhere in Bethany, 2 Miles from Jerusalem, in 33 CE, a Rabbi resurrects the dead. At the same time, beliefs about religions were on the verge of becoming ossified. There is more to know about the same, especially when a gang of Praetorians Guards traverse through a time-testing territory.

Initially, I thought it to be a complete historical fiction but soon action takes precedence over everything. In Rome when a plane lands declaring emergency, the Kirk Ingram adventure was waiting to happen. What all happened on that flight Axium 2315? The story is long here onwards.

A killer called The Contractor, a business tycoon named as Combe, a sadistic mafia – all behind Kirk, once an FBI agent, as dreadful as death and enigmatic as black magic? The story from Amanda and Jovanni Rossi’s end is also riveting.  As you delve more, the bundle slowly unfolds – a load of action with sheer delight spills over.

Have you ever heard of hyperawares and plane of existence? What is what and who? What personality is influenced by what? When it unfolds, I got catharsis. Though this novel was a new experience for me, overall, I found it worth my time and money and since I am a Dan Brown fan, I am somewhat smitten by that religious belief bug.