Book Review: Vesela and the Vervum World by Mostyn Heilmannovsky

April 01, 2020
I have been reading and watching vampire and Dracula related stuff since a long time, as long as I remember. Vesela and Vervum World by Mostyn is a terrific novel and I am bit diffident that whether I would be able to express all my praise and gratitude to the novel. I read it on Kindle, it has over 300 pages, but since the very first page I felt like I want to know more about the vampire types and clans and so on. Well, this novel is about a war preparation. This is a multi-themed, rather multi-dimensional book spanning across a few worlds like of vampires, dark forces, dragons, and humans. 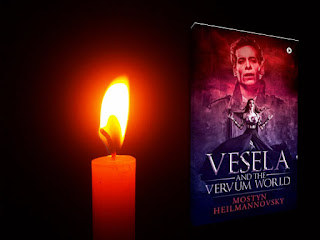 The story features Vesela – she is a teenage girl who loves her goat very much. She lives with her small family in some part of Europe. But the fact that she is extremely special puts her into trouble when all forces from different worlds try to take advantage of her.

Much since the beginning of the novel, the tale of vampires begins. They seem like omnipresent and never die or age kind of people. As I got into the story, I realized that vampires have clans and castes, just like humans. However, they live in different worlds such as Vervum, Arvum, and so on. They are divided amongst the clans and have surnames like Radafu, Bruja, and so on. However, the superior ones are Vervums, they have lords and warriors, etc. According to their superiority and status, they have thinking powers and amazing teleportation. It’s fun to read such blending of imagination and fantasy with a riveting backdrop, spanning across continents and time duration.

The villains of the story are Orders, and Dragons, and a few vampires who ally with others to go against the vampire world. The least coverage is given to the human world, from there only the girl Vesela looks of greater significance. All the worlds are living peaceful. But secretly Orders plan to topple all the worlds to rule with their supremacy. The Orders include, Order of Blood and Order of Shadows. They conspire to kill and defeat all that go against them by not collaborating with them. But on the other hand, vampires are happy at their worlds and at any cost want to save their prestige and the world. For the same, they begin training and waking up many sleeping clans. They travel and share their experiences while preparing for the war. But the girl Vesela is important as only she can act as an intermediate to carry out certain tasks at the neck of three worlds. On one side vampires begin their work of convincing vampires and others like Yetis to support them, on the other hand side, Orders try to ally with some of the vampire clans and dragons and others to seek their patronage in the war. The war is imminent. Well, this part is all about knowing the vampires and others and preparing for the time that can endanger any one’s life.

It’s a beautifully written book by Mostyn, he already has bestsellers in the form of cryptids and paranormal short stories. This vampire novel is first in the series…more parts are about to get published quite soon. Anyway, it was a great, though I took time to finish it…totally worth. There was so much detailing about vampire and other dark creatures but I didn’t get bored even for a moment. For vampire literature lovers, it’s the best book to be picked up if you are done reading with Dracula and Twilight stuff.