Kindling by Kanika is a fantasy thriller with mythological feel in it. The novel is a prequel to the novel “Rage of the Immortals”, where we saw that two brothers Cifer and Atom are fierce enemy. The former puts all on stake to save the Underworld from the wrath of Atom, the King of Heaven. 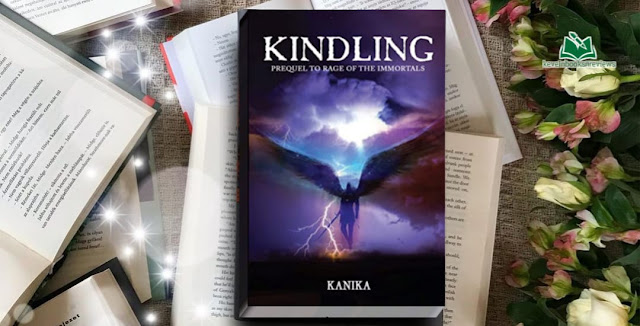 Rage of the Immortals isn’t about back stories and sweeps. It’s an action-packed fantasy thriller with a long cast of characters. Kindling comes around the time, does the back story part for those who have read the sequel in the series. This novel does the world and ground building for two of its ace characters: Cifer and Atom. Both are brothers, and are immortals. The story sheds light on their limitations and abilities such as magic, anterworld, emotions, were birds, human, sentinel beings and so on.

Kindling has a limited cast of characters, however, as the storyline picks up pace, you will not only be intrigued but also nonplussed to witness their idiosyncrasies, strange peculiar feelings, aspirations, and of course love sagas. Cifer, Atom, Ivprith, shape-shifting cat Nightmare, Ukhab, Dave and Davie – are some prominent characters that loom across the story continuously.

Cifer and Ivprith are in love. But it was shadowed by Atom, who had a huge crush on the Lady of the Wild (Ivprith), but he was hesitant due to his brother Cifer. For much part both brothers care for each other. In the aftermath of Ivprith’s death, things begin to change, a gulf is created as Atom deliberately did not save her.

Since the story is preparing scaffold for the future books in the series, the lead characters here remain as naïve as first timers. Their way of thinking, paying back deeds, approach to revenge and friendship is tender but ossified into rigidity towards the end of the novel. You can read this novel as a stand-alone, however, its ends on cliffhanger, thus, automatically you will be nudged for its next part.

The pillars of the story rely on powerful world building by Kanika. Her characters, their ways, their worlds, feelings, in fact everything is bewitching and holds a new lineage of capability. The plot twists and turns at times predictably, while mostly it convolutes with sheer delight of unexpected components. The author shines as prose master storyteller. Her words come as a bundle of vivid descriptions that take readers on an imaginative journey as wonderful as any euphoria.

Buy the book from Amazon/Kindle.