Book Review: Witness to a Wild Goose Chase by Triloknath

Triloknath is a prominent Indian author known for Odyssey of Self Realization book series. First one was ‘Witness to a Wandering Mind’, an award winning book that narrated the tales from his early days of upbringing, before the partition of India, the book was set in the rural and semi-urban backdrop and had a streak of social evolution and development. However, it was more on a personal and family front than the collective society. 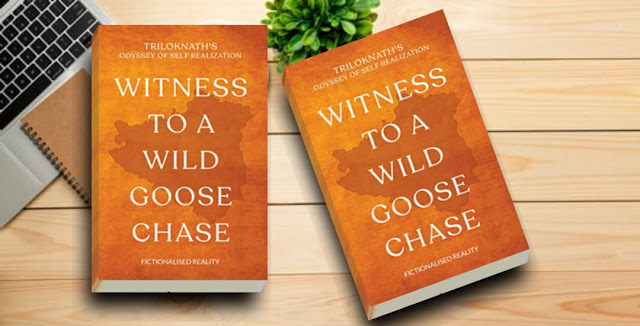 The second book ‘Witness to a Wild Goose Chase’ is clearly staged against the Punjab state of India, and it has T.N. Gupta as a major narrator and voice. This book is more about finding happiness in the realms of hedonistic world. Thus, the title is apt and the phrase wild goose chase means a foolish and hopeless search for or pursuit of something unattainable.

The protagonist Gupta moves to Punjab in a government job in a society of government employees. There he and his family find it difficult to be in good books of everyone. Gupta who works in PWD department has tough time explaining his colleagues and seniors the true meaning of life which is gripped by karma and righteousness (dharma).

Gupta wants to have conducive office arrangements and ambience and looks for a steady growth but others make it hard him to realize that quest for happiness is a waste of time because even if he is right and fine others will have agenda and ulterior motive to bring him down.

The novel is spiritual while sounding a work of fiction. In between Gupta holds conversation with his Atmadev, an illusion of mentor. The book often teaches about moral values and its allied proclivities. Right at the beginning, excerpts could be find, lecturing about what is in dharma and right, and what is totally outrageous wrong, for instance the author puts that Saraswati and Lakshmi are not worshipped together, where one resides, the other one does not. Hence, wealthy people often lack educational qualifications, whereas cultured classes often have to live in penury.

More drama ensues when the government launches Model Village Scheme, Gupta has one department but he could not avoid crossing with others when it was about responsibility and channelizing man power.

Though the lead character gets some good news in the end but by that time he has attained his spiritual lessons, foremost is that an active normal human being may not attend a balanced life, which is nothing less than a secret for leading a happy life.

As usual Triloknath’s narrative was familiar and tightly packed with its intense language usage. Though there are no gaps but one needs to have immense patience to read and grasp what he is trying to convey with a book that underneath is a spiritual endeavor in the guise of a fictionalized reality.

You can buy your copy from Amazon/Kindle.