Yuddh Ki Sanstuti (Hindi Edition) by Arvind Kumar Srivastava is an interesting novel whose story emanates from some hidden artery of Mahabharata in a very sharp and detailed way. It’s a Hindi novel of around 300 pages. It’s not a retelling of Mahabharata. Rather the story is one part from Mahabharata. As we all are familiar with epics like Ramayana and Mahabharata. But only a handful of people are aware that there are many sub stories that existed in these two epic sagas. 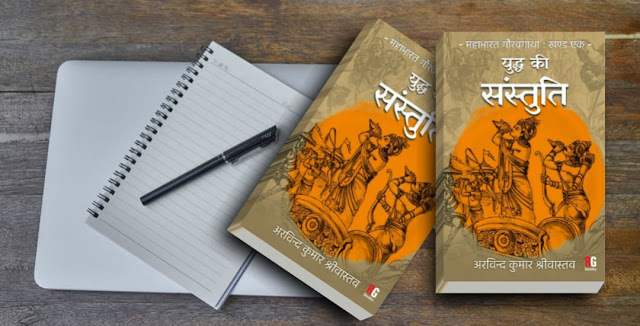 This novel is part one and the author may come up with some more parts in future. This story is set in the timeline of when Pandavas were hiding for one year i.e. in Hindi we call it Agyat Vaas – anonymous period of one year.

When Pandavas were sent to forest on an exile of 12 years, they also had the term to remain anonymous for 1 year. And if they got caught in that 1 year of being an anonymous, they will be sent for exile once again and will not get anything from their state Hastinapur which is being ruled by morally corrupt Kauravas.

The book is written in Hindi and it does not hamper its brilliance. Even naive to new readers will find this novel highly entertaining and easy to understand. The title means recommendation of war. Broadly putting the novel is about preparing for war that is going to take place between Pandavas and Kauravas.

At the story we see that Draupadi and her five husbands take job in the palace of Maharaja Virat and Sudeshna. They are working in disguise. Their names and appearances have changed. Draupadi takes a new name Sareandhri. She is the major domo of the queen. But problems begin pouring when the queen's brother Kichak eyes her. He wants to have her and the queen has a nod in it.

Soon Kichak is killed by one of her five husbands. It's shocking as Kichak was not only the brave army commander but also a valiant fighter. The news of his death reaches to other kingdom called Hastinapur which was ruled by Kauravas. They got the hunch that Pandavas are hiding their, as Kichak can be killed by only three men Bhim, Suyodhan, and Balram. So, it becomes clear that he was killed by Bhim. And this actuates Kauravas to invade the Virat Nagar where Draupadi and her five husbands are hiding. The rest of the novel is all about how to catch them and in between a lot of war preparation goes on. As the story progresses, a lot other familiar and unfamiliar characters come in the limelight.

Initially you will struggle to identify the core theme of the book but a few chapters and you will get into the mainstream of Mahabharata. Yes, this book is limited only to war preparation. Next parts will take the entire saga of Mahabharata ahead in parts. Indeed a good book with twists and turns with pragmatic message for the people of world. The premises looked familiar but it guarantees high dose of entertainment.