Book Review: And the Night Rolls Over by Avneesh Mahajan Madhur

And the Night Rolls Over (रात फिर निकल गई) by Avneesh Mahajan Madhur is a splendid bold collection of poems on a gamut of topics that range from contemporary to nostalgic moments to many more. The poet confesses right at the beginning that this collection is a result of bouts of insomnia that he endured…but later on it proved fruitful as he began penning down poems while the rest of the world slept in the comfort of their epochs. 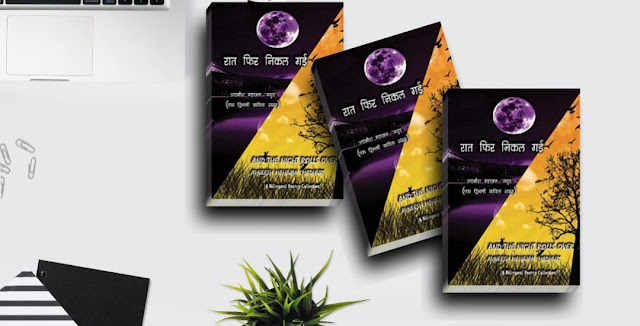 The collection commences with a very apt yet realistic poem on sleep concern. The poet struggles to get a good sleep but he is unable to get that as he thinks of various things pertaining to his life. This poem suggests that we should not procrastinate on the things that we want to achieve or desire. The poet thinks about many things but the night roles over…as time and tide waits for none.

The stance of the book troughs and crests with its subjects. As you chug ahead with the book and gets under its skin, you will feel the anguish and optimism of the poet. For instance, with poems like Prime Time, and The Gazette mulls over the futility of news channels and mediums that hardly spread anything sensible. Similarly, poems on protest are engrossing but unveil anguish of many that are agitated by it. In this line, ‘the Blue Passport’ poem is terrific. Not only a handful of themes rather the book is full of many relatable themes, one such good one is 24 December 1982, the poet throws the readers into a loop of nostalgia while remembering about his army days and fellowmen.

Avneesh Mahajan has a great flair of poetic writing, the way he simplifies issues and puts juice is praiseworthy. Probably, for this reason he is revered with the sobriquet ‘Madhur’, as great poets used like Nirala and Faiz. It is a highly readable book because of its bilingual nature. Whether you read the Hindi one or English, the intensity and meaning remains same. Because of its dual language aspect, the book is widely accepted by the domestic and international readers with an equal élan.