Sitayana by Rajnih Rethesh is a terrific page turner, blending crime thriller and mythological genre into one. Stretching up to 270 pages, the novel holds two stories of different eras, but their relevance converges into one. The story is about Sita and Sitalakshmi. The story of Sita emanates from Ramayana. But this time the author narrated Ramayana from Sita’s point of view, while the story of Sitalakshmi is set in the modern Mumbai. The novel is driven by ladies. The author brings the plight of women, be it any era, they are trampled by men and are tied to limits by the brutal nature of patriarchal society. 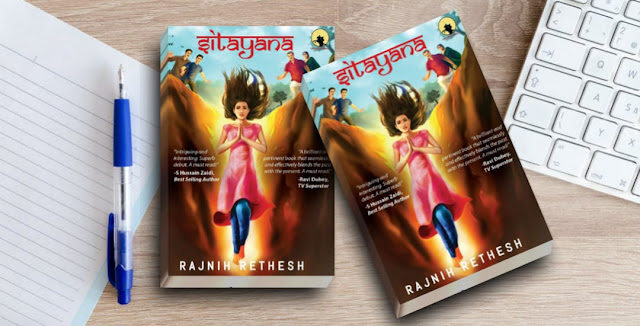 The novel shuttles between two timelines, but it has been done so smoothly that one doesn’t feel the pinch of miscommunication. The story of Sita comes as shock for someone who has always worshipped the lord Rama. Well, this novel dredges up the secrets that not only look uncomfortable but also question the veracity of the Indian mythology. Sita has been portrayed as someone quite bold and fearless. She could never settle with the beliefs of the kingdoms, exile, fight with Ravana and so on. It could be possible that readers may like the story Sita more engaging and powerful in comparison to Sitalakshmi.

In the modern-time Mumbai, a writer and columnist named Sitalakshmi could never find solace and love after her marriage with Karthik. On the behest of Gauriji, one of the members from Maha Hindu Sabha Party, Sitalakshmi is writing a religious book which seems controversial to many people. A lot of drama begins in Sitalakshmi’s life. No one supports her at family. Well, then one day Gauriji is murdered. And Sitalakshmi disappeared.

The case comes to badass CBI officer Diana Varkey. She has to uncover two things: fate of Sitalakshmi and who killed Gauriji. The officer prepares her file and questions many people who fall under the radius of suspicion.

The novel has many points, if one devotes time and reads honestly, well then it is nothing less than a riveting saga of two women. All of her characters sounded credible, strong and equally perpetual. One could never find out as who is leading the story and there are no predictable twists and turns. This novel doesn’t depict feminism as one of the themes, rather it questions the tapestry of society that traps women and kills their aspirations and dreams and decision making. Socially and politically, this novel has a good weightage. Rajnih is a master storyteller. It is lovely to observe how perfectly she has weaved the plot of the novel with more than two timelines and stories. Her flair for language and storytelling is evident right since the first page. An amazing novel – way ahead than its genres.