Book Review: Escape to the Galaxies by Vidyasagar Mundroy

Escape to the Galaxies by Vidyasagar Mundroy is an exciting science fiction set in the universe. Of all the science fiction set in the post-apocalyptic worlds, this seems to have exceeded all imagination. This novel’s story is totally into future, in a universe where people travel or migrate to different galaxies and planets as today we travel to cities of one country. It is a lengthy novel with much focus on Mars and other exoplanets where most of the population has come from earth. In the story, earth is there but like a silent banter in the backdrop. 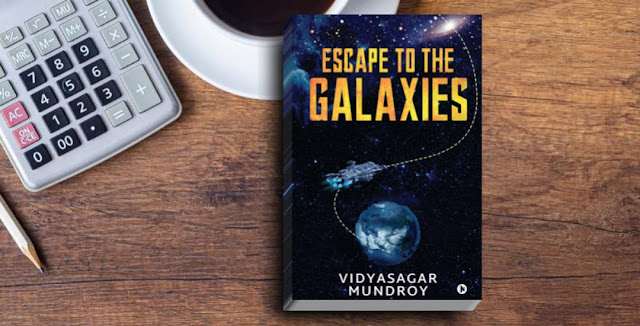 The storyline is fragmented because of various backdrops, the author is right in that sense one cannot capture universe as one setting in a single novel. Right at the beginning, there is a long list of dates and events that took place once earth fell to the bad karmas of human beings. And in the end, the author has presented jargons or terms that are widely used in the novel such as ESS1, name of various spaceships like BMSL – 840, MarsMap, LYPH and much more. For people always fascinated by space and unfathomable universe, this book is just a special treat.

Reading this book is like getting hands on with new worlds, there are different patterns of lifestyle for humans that have settled rampantly. However, on a sad note, it is to be noted that humans killed earth so badly that in the end they had no option but to colonize other planets of different galaxies. Though the novel is very much based in Sulok and Mars, yet it looks like humans never run out of options for settling down.

The timeline of the novel ranges between 2050 to 5062. Clearly a story in far-away time.  Readers will be fascinated by imagination of the author who must have invented a lot of things to make this novel look surreal. The expanse of the novel is way great and vast. Basically, the story concerns the dying state of the earth. There have been some organizations that took so many resources from earth that the planet died a slow death. People in the universe called it a bitten apple. On Sulok planet, a student called Halik reads the A to Z about earth. He wants to go there. As time comes, the UWU selects Halik and others for sending them on earth to stop the organizations or people who are exploiting it. But well before there is a lot of story that you need to traverse to understand the true nature of the novel. Yes, the novel is lengthy but it ends on a cliffhanger sort of climax. Read it to know why some families fleeing earth? Read it to know whether Mars will have a fate like earth or something sinister gnawing it? Wherever humans go, there are problems out of greed and prejudice.

It is a special novel that can show the mirror to our current human race. Conservation of earth is the clear message that this novel leaves with its readers. On a con side, there is too much explanation of things and events and options – at times it may sound that keeping track of events and characters will be tough. The writing is way simple and the author has tried doling out a lot of his imagination lucidly. It is a great read with great message for the humanity.