Arihant Resurrected by Shubhan Balvally is a second novel in the Arihant series. Those who have read the earlier part Arihant: Revenge at Par Excellence will have a soothing experience with this part. As you begin reading, you may come across a familiar feeling of ‘I-know-this-guy.’ However, the premise of this novel is way vast and detailed unlike the first part which was too fast and short. In the first part, we saw that Professor Satish Ramanna was chased and murdered by Madan Kalra men. They wanted to seize his next invention. And then the saga of revenge commences by someone too magical to believe. There was a lot of suspension about that magical figure. 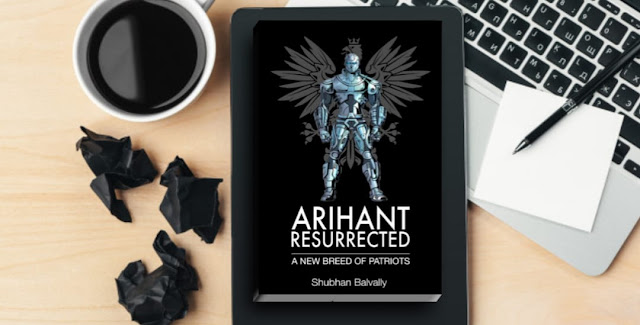 Here, in this part, it is open that one robot that many believed as Arihant is at the centre of the story. This novel focuses more on a new breed of patriots. Now the revolution is not just at a lab, it is gaining momentum. Good and powerful people are picking up the sides. As the novel opens up, we are reminded of 26/11 Mumbai terror attack. Some terrorists attack the railway station…but this time before they could repeat the history, they are torn apart by that robot Arihant. How and why?

Well, in the first part, the robot Arihant was destroyed in a chamber. How did he come into existence once again? Only Professor Ramanna held his key? As you chugs ahead with the story…the urge to know more about the robot will haunt you. There is a lot of adventure and drama in this novel. Most of the time the robot reach at the crime place to fight off the terrorists. In this book, the villains are specified quite clearly. The enemies of the country are some Lashkar Brigade from Pakistan Occupied Kashmir. They repeatedly try attacking Mumbai but to no avail…because of that Robot.

The second aspect of the book is investigation by the police team. This time we see JCP Arvind Sinha and also retired ACP Anand Rane is called back at the behest of Chief Minister (CM Vinay). They have to tackle the source of terrorists and who all inside people are there with them. So, truly after one point of time, it looks the plot is divided between patriots and traitors. Other than action and adventure, the novel also explores themes like family bonding, sacrifice at the duty, true love, longing for past, and much more with the help of many characters. It is a well-laid out novel with Mumbai as a credible backdrop. This second novel in the series promises a lot of entertainment. Shubhan Balvally looked evolved with his narration and storytelling skills with this novel. Presenting a novel with such an interlocked tapestry is indeed a commendable job.