Silent Fires by Poojitha G Prasad is a riveting crime thriller with a totally unpredictable storyline. The novel sets in contemporary time with a backdrop of South India. The story starts with Shravya Chandra goes missing. She is a high profile wife of the film star Arun Chandra. While returning from a short trip with some of her female friends, she goes missing. As the investigation kicks off, it seems that she has been murdered for some ulterior motives. 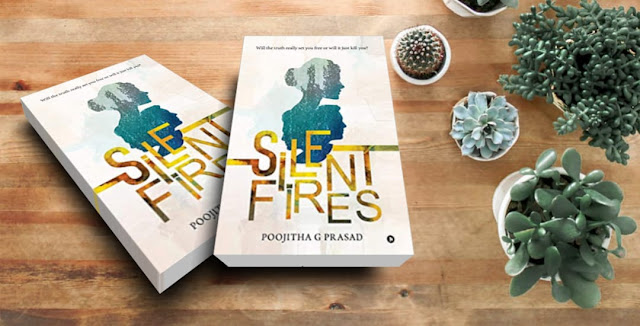 Shravya is neither a protagonist nor an antagonist; however, she remains in the story like banter in the backdrop. Her absence drives the plot ahead. In the limelight, there are two lead characters – Ashish and Manav – they are brothers. The author has taken care not to mix both the characters in chaos. Right in the blurb, she is clear about their tenacity. Ashish is a police cop, he believes in his gut instinct, while Manav is not a policeman but he is associated with crime reporting. He too loves solving cases but with a different and rationale angle.

Ashish is investigating the case of Shravya. He is ferocious and believes that Arun is hiding something dubious about her. On the other hand, Manav’s focus is on Shravya’s friends with whom she was seen last. The case is not straight as one could think of. There are many subplots and climaxes that mislead and one needs to read the book till end. It is one of the rarest books in crime thriller genre where almost all characters fall under the purview of doubt. The plot is intricate yet tender.

A lot of drama and action unfolds directly or in the form of sweeps and back stories. Manav’s part is way captivating and overshadows other investigating tools.  It becomes a sort of addiction right in the middle to know who is going to solve the case or will they converge to the same point. It is a great novel that needs to be savored slowly. In fact, auxiliary characters were also so captivating that at one time the plot demanded their presence more than anything. And the contrasting nature of two brothers is nothing less than lollapalooza. The author Poojitha’s narration shines throughout the novel, at times it’s slightly coherent that one may think of skipping pages but that will spoil the game since the investigation proceeds from two ends.