Book Review: Based On Lies – The Whole Story by Debarshi Kanjilal

June 14, 2020
Lies and deception are two strong aspects on which a dark psychological thriller can run successfully. And here I found Debarshi Kanjilal's novel, Based on Lies–The Whole Story tense and gripping. For me, it turned out to be something at first difficult, later on as the story got under my skin I had to wake up many a night and reread various parts of the book so that I could follow what the lead Anurag wanted to express. 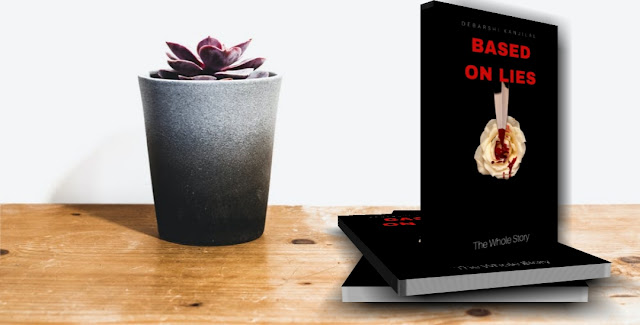 In one statement: disturbing, dark, embarrassing, yet highly entertaining! It’s a short read of around 97 pages. The novella in particular has no leading detective personality. I blindly followed and believed Anurag Sanyal until the second part comes in the picture.

The book is divided into two parts – first is Anurag Sanyal’s diary, where he has written about his feelings and crimes and of course confessions too, and the second part is where he is taken into prison for murdering Aditi. So, as a reader I was bemused when I got into second part, while reading the first part I was all convinced and in fact enjoying his whims and misadventures and more.

The story is based around Anurag Sanyal. He is a sort of man with some suicidal tendency and highly disturbed. I think he is going through some mental disorder or clinical depression – whatsoever it but one thing is clear that he is lunatic and dark. In the diary part, there are many events unfolding that could send any normal reader in a fit of dark daze. The diary is where he wrote about Aditi’s affair with Subho, Niharika’s death and betrayal, rape of Luna, his visits to a café called the Eastern Delight, his affair with Sindhu Baruah, and confrontation with Tawang.

If the diary is to be handed to the police, certainly Anurag will be behind the bars until he is proved charged with some serious mental disorder. Brilliance of the book is the well-drawn credible characterization of Anurag and how all of a sudden the world turns upside down for him. I felt as nothing would affect him. The novella is also slightly tilted to human desires and aspiration; it got clear whenever I got to know the sad story of Niharika and active Aditi. But Niharika was in backdrop, and Aditi was in the limelight. Going by the diary, Anurag had healthy chemistry with Aditi. But the question is, why did he murder her?

The whole vibe of the book was really frightening yet enticing. The lead Anurag Sanyal was quite complicated to deal with. He was, I think, Necrophobic. Fear was the base of this spine-chilling dark psychological thriller.

Much credit should go to Anurag's psychological disorder, he was odd, but sounded seamless, yet depressive and the victim of an unknown psychological disorder. The second part of the novella is comparatively pragmatic, a doctor does some shallow investigation to find about the mental state of Anurag – but I felt he didn’t. I wanted to know the real identity and nature of Anurag. Apart from the diary, I must congratulate the author that he succeeded in hiding that. The first part was quite dark but it makes up the entire book go ahead in a way a dark and thrilling psychological thriller should be.

It’s an interesting book – narration and unfurling of events, one after another, is well captured and it nudges the readers to take stock of the action and drama lest they get astray midway. Overall, a brilliant book by the Indian author!