February 06, 2020
Seeking Greens (The Lost Trident) by Mishthi Arun is a riveting historical fiction, with snatches of fantasy and Indian mythology. The greatest aspect of the novel is its shuttling between two very ancient civilizations: Indus and Mesopotamia. 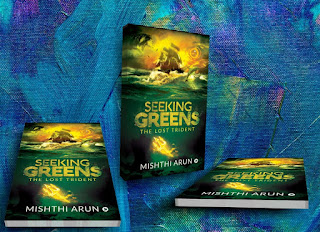 The title of the novel is objective. Look at it, ‘Seeking Greens.’ What does it signify and the next phrase is ‘The Lost Trident’. After reading the novel, one can grasp that in the novel runs a great quest. What’s that? The semblance of the story takes us to the Indus Civilization around 2150 BC – clearly the time line is not only ancient but primitive as well. There have been numerous novels based on modern and medieval history since the research material is abundant. On the other hand, carving out a novel from the dawn of human civilization is not only a daunting task but also demands an apt precision and a great sense of imagination. The novel sounds absolute credible at all junctions – that’s a great reward for author Mishthi.

Outwardly talking about the main storyline, we see that people are in trouble for one reason: rivers supporting the civilization are running dry since a long time and everywhere the green grass is turning brown. Is this a sort of a curse? If so, the main reason behind the curse is a ‘special trident’, which was bestowed when one priest did some rigorous meditation in the Himalayas. The trident was supposed to maintain everything in balance for the people dwelling there. However, one junior priest did something unforgivable and the trident was lost, as a result the curse falls on all the folks of the civilization.

To reverse the curse, a combination is needed. But how will that combination come into effect and who all will take an arduous journey to Mesopotamia, where presumably the trident is. With all puzzles in haywire, three young men (Shivendu, Aagneya, Abinivesh) from the Indus Civilization summon up courage to do something for the love for their motherland. But are they right men? Can they go there safely and fetch the trident? What will happen if their journey is never completed, like the previous troops? The land which they are heading to, is simply unknown to them, and what possibly all dangers lurk there. They just have no idea.

Though the novel is just 150 pages, it reads like a saga, their journey, strange landscape, different kingdoms, and queer cultural setbacks – all make this novel unputdownable. There is so much to know about that era and their cultures and difficulties. The author must have done a commendable job by binding facts, stats, and imagination into one. For the readers, the good news is that this book was Amazon Bestseller and its sequel is coming soon. Full of adventure, drama, and at times melancholy, Seeking Greens is a bang on historical fiction readers’ expectation.

With simple, clear, and prose like narration, Mishthi Arun is a promising author. If she could develop a hero like Sharp (Bernard Cornwell novels), her novels may never step down from the bestseller charts. Without giving away much, we highly recommend this novel and more about it can be learnt through this video: https://youtu.be/I2ANKyKfUAM