February 05, 2020
Samsaara (Devadoot) is a very likeable novel for its innovative approach, well-fitted in a fantasy form. The story revolves around the lead character Rishaan Kel from Mumbai. One fine day as he was passing through a temple, he stumbles upon a beautiful girl, but out of nowhere she disappears in the air. He is befuddled, but she leaves an enigmatic hairpin for him, probably made of gold. Here onwards the restlessness of Rishaan kicks off and the story in the novel gets altogether on a new venue. 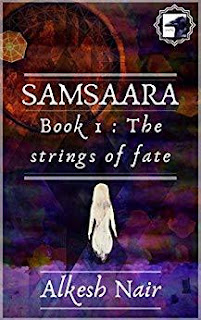 Taking ahead the main story, Rishaan Kel is initially obsessed with a career in a detective field. However, little did he know that he has gotten over the some really incredible powers via that hairpin? He tries to understand it, while the process takes him to far-off lands and at various circumstances. The hairpin gives him three incredible powers; one such is teleportation to another world or time. What are the rest two? You must grab the novel to know the same.

Like most of the fantasy novels, this too takes us to a fight that is between dark and good forces. For this, we have the Guardians and the Watchers. What was their connection and why are they fighting? And how Rishaan Kel got entwined among them, fills the rest of the narration. The way story throws unexpected twists and turns at each juncture is worth praise and not for a moment you will feel that the story is going to be stagnant. Different landscapes, monsters, forces, pesky villains – all blended in such an engrossing way that you may not feel like giving up the book. The novel is exceptionally high on suspense.

I think this is the first part in the Samsaara series. More fun to come. For fantasy and thriller readers, this novel is an impressive work. They are going to keep it fresh in their cask of subconscious for a long time. Writing, pace, narration is super fantastic, and most important is the wit factor – it keeps the story charming and relevant.


Character Sketch of Binya from The Blue Umbrella by Ruskin Bond
Binya is the main character of the novel ‘The Blue Umbrella’ by Ruskin Bond. Her full name is Binyadevi. As in the hills or anywhere in India it is a kind of trend to call children with their short nicknames. Binya’s elder brother’s name is Bijju, whereas his real name is Vijay.
Binya aged eleven is a hilly girl. She lives with her small family in the hills of Garhwal. Her father died when she was two years of age. For sustenance, they have three tiny t…
1 comment
Read more