Book Review: The Girl with Golden Thoughts by Ashutosh Jogia

January 30, 2020
The Girl with Golden Thoughts by Ashutosh Jogia is a fantastic Hindi novel of optimum length. The story revolves around a girl called Nirjara. Other characters think that she is the same girl whom they assume ‘The Girl with Golden Thoughts’ in some magazine. Well, the lead character Vyom and Alisha first investigate that and then send their shy friend Bhaskar in the hope of forming a love story with Nirjara. How it all works up, fills up the rest of the narration. 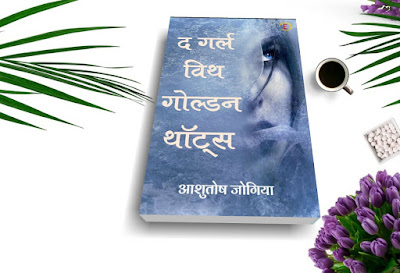 There are a lot of twists and turns in the story and I really liked the political drama and the teachings that come for the society. It is mixture of a few themes into one, such as romance, friendship, politics, spy, and so on. Though it is written in Hindi and I admit that I do not read many Hindi or other language novels, but this one had a different charm on me. I was swayed by its charm that since very first page I decided that I will complete the book, no matter what may come.

But slightly I got confused with the characters, there are Vyom, Alisha, Bhaskar, and Nirjara – I was keep thinking about the lead character for long time. As it’s based around that girl with golden thoughts, I think it is about that beauty Nirjara. They take Nirjara as an highly intellectual person, but is she worth that claim? But one thing is sure, among all the shy and introvert Bhaskar becomes a scapegoat.

Overall, the suspense was maintained even till the last page and I was wondering what will happen if Nirjara comes to know about the trap set by Vyom and his party. But I was wrong… the ending was something different and took me by surprise.

Since the novel was light and easy to read with English vocabulary, I felt at ease as a reader. I think I will try reading some more Hindi novels. On a plus point, the author used modern-day Hindi usage, thus it was handy to connect. Overall, a smooth narration with a good pace! I liked it the way I like other books and novels.