October 05, 2019
Don Roberto's Daughter Natasha by Connor Royce is a fascinating read that weaves a beautiful tale of true love against the heat and difficulties of two cultural contrasts. The story kicks off with Natasha. She is an immigrant in the USA, in Texas, working at a shop, and also learning English to advance her career chances somehow. 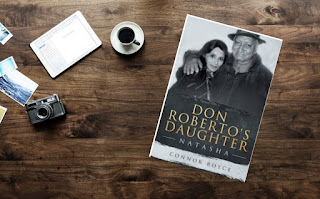 Well, before we get more into the book, we would like to tell you that this novel is not based on around mafia world – the way did by Mario Puzo. You would be surprised to know that Don is a kind of prefix in Mexico and it means respect. While reading you will find many more Spanish words that are commonly used in Mexico, such as Gringo, Hola Chica. You would be nudged to check for the Spanish to English dictionary online.

The novel is well placed between the cultures and landscapes of two countries i.e. the USA and Mexico. Natasha lives with Sofi and others – they all are struggling immigrants in Texas. The author has rightfully captured the basic struggles of these people, like searching for a job, housing, and trust in the society.

The main lead male character is Sean, he was into the air force and also fought Vietnam War. Well, he drives a truck to provide some supplies to a shop where Natasha works. Gradually, they get along and their love begins to ossify with time. However, little did they know what is stored for them ahead?

Initially, the story gave the impression that it is going to be predictable and one of the characters may change in pursuit of something better. But that was not the case. The most prominent aspect of the book is bringing forward the differences in all spheres of life. It is the difference that makes the most awkward love affairs into a saga. Same here, Sean is an American, and elder to Natasha by a decade or so. Also, Natasha has different grooming and home back in Mexico – and above all, the barriers of immigration law. Once she was deported. And for Sean, nothing fixes well in the time. You would begin feeling for their miserableness.

The ugly turn comes when Natasha goes back to Mexico to attend a friend’s marriage, where she falls sick and gains a nameless mysterious disease. On the other hand, Sean has had a slip and out of work and many other chores. Sean has really tough time managing his expenses and his son from the first marriage. The novel, chapter wise, shuttles to highlight the grim plight of both sides. However, in that shuttle comes forward an interesting story for the readers, especially Mexico coverage is riveting. Natasha’s family back there struggling for tiny basic things, and she breaks up with her previous boyfriend Luis.

With that disease of Natasha, Sean’s misery, and immigration hurdles – all together put in one bucket –anytime this novel is something extraordinary to offer. Other than the love part, the novel is also prominent in highlighting the significance of spirituality that inevitably affects the destinies of people. When the novel moves to Mexico for some time, and Sean is there to bring Natasha, the story is haloed by tragic snatches. There is much heaviness and intensity in the story that at one point of time you will be relayed with it.

Yes, the novel is a bit lengthy, and manages to gain momentum after some early chapters, all the more when Natasha struggles to come back to USA for Sean. But despite all, it is a convincing story about love, struggle, spirituality, tragedies, hardship, and redemption. The author has a charming flair for narrative that sweeps from one stretch up to another. Not all love stories can be so thick, engaging, and interesting like this one. Kudos to Connor Royce!