September 08, 2019
This is the second time that I read Rimple Sanchla. Her first book, ‘Handwritten Letters in the Bookstore,’ was a gentle love story, that novel was also poignant in exploring the lost days of 90s. Being a 90s kid, I loved that book’s content and connections. Since the first novel was captivating, thus expectations from the author rose up when I picked up her second book, ‘Men Are From Earth, Women Are From Earth’. 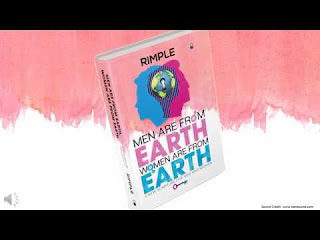 To be honest, the content and storyline of the book were different and previously unheard by me. Since I read more of fiction, well this novel seemed like a blend of fiction, documentary, and psychology in one. From a narrative’s point of view, there runs two stories, kind of parallel. One is of Rohan, he is one of the characters from the protagonists’ elite. The second story runs through the book or say diary of Rhea – she leads the story most of the time. Well, not to mention the third character Siddhartha. He fills the gap between Rohan and Rhea.

Soon getting into the book, the professions of the characters are revealed. Rohan is a popular actor in Bollywood, while Rhea is a successful psychologist, sexologist, and relationship coach. Rohan is going through a tough time, though he is rich and a famous name, but still his memory from childhood haunts him. He is about to get married soon, but that’s bigger dilemma for him. He doesn’t know whether he should move ahead in the relationship or not?

When he came across Rhea’s diary accidentally, he deems her as perfect to help him get out of depression and other pessimistic things from his life. A casual tone is being built around the initial blocks of their friendship. Well, once Rohan becomes a regular patient of Rhea. The book, altogether, gets on amazing, yet different, stance. As the story chugs ahead, the familiarity between all three’s stories grow concrete.

What I felt more stand out fact that childhood is a delicate phase of life. Things and events happened during that phase always haunt us. Either we try to improve that or prefer seeking revenge, or get stuck there. In the story, all three characters have had something dull or untoward that happened in their childhood which ultimately obstructs their lives, even currently. In the case of Rhea, she hated being isolated during periods and never liked the patriarchal arrogance of her family members. She is not inclined towards feminism, but there is something that she has found male chauvinism hateful.

This novel tries to break the stereotype barriers set by Indian society. The author, through her characters, seeks something unspeakable. In the form of Rhea, she tries setting it right – guides couples and individuals as to how to come and survive in their relationships. Being married is not about coping up.

The diary of Rhea has terrific revelations to make about her discriminating childhood and what all things turned her against the one-sided society. She explores various examples of where women and girls led from the front but yet got ignored. She has given many examples from all spheres of life and the world. Things need to be set right, this gender machination which has been into practice for over a thousand years needs a concerning approach. Through the poems, it has been signified that when a boy is born he is given a blue colour, while pink for a girl. The question is, why? Why such conditioning. Thus, the title is apt that both are from the same planet – Earth – then why this discrimination.

The look and feel of the novel is contemporary. The stories and their characters are quite modern, and the issues that grapple them, are being faced by many. This novel can help you set things in order if you are on the verge of pessimism or being haunted by childhood’s ill memories, or in a relationship that is stagnant because of some reasons.

In her second book, the author Rimple has evolved. The subject of this novel sounds more mature, and of course clean, with no adult stuffing. Take time to read this book…you may finish it fast because of easy language, but I want you to consume the essence of the book at your own pace.