February 24, 2019
If you have read books and seen movies on the Ramayana and the Mahabharata, you must be aware of various types of weapons used by gods and their allies. Those were known as astras and shastras. Are today’s mass-destruction weapons are inspired by those weapons of gods? Possibly, yes. Now, we have Divyastra by Nimish Tanna – this suspense thriller’s roots date back to the Indian mythology and it delves deep into astras and shastras of Vedas. As the title suggests, Divyastra was a weapon of mass destruction: who possessed it, how to use it, when to use it and so on. This all seem captivating but do you have any clues about its dark intricacies? All these questions will be unveiled in this novel. It is a perfect blend of today’s modern science and the Indian Mythology. 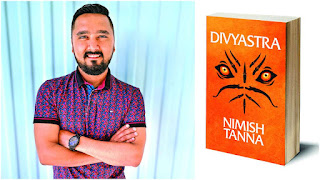 The novel has around three stories running parallel. However, each part is equally captivating and gives you hope that sooner or later they are going to converge. Even before that happens, you get with them – as the book is written in such a way that when all these three narrations overlap, you don’t even realize. That’s fantastic work by the author – praiseworthy.

Coming to the story, we mainly see three characters in great limelight, and others are good with their auxiliary powers. Shankar, a call center executive, is not so happy in his life. When he goes back home to see his dying father, through his grandfather he comes across an amusing tale, and little did he know that his life is not going to be same anymore. The story that he hears from his grandpa leaves him befuddled and he contemplates to put the puzzles in the right sequence. Will he be able to do that?

Major part of the book is spent with the story being narrated by grandpa – it mainly features Indrajit and one saint called Guruji. Indrajit is a thirteen-year-old boy, he is shy and introvert and remains secluded from the world because he stutters. On school picnic when he gets lost in a national park, he is saved by the Guruji. However, quite later in the book it comes out that the actual Guruji who had been behind Indrajeet like shadow was not a saint; he was someone else with devilish intentions. He was behind celestial weapons…but why so? You got to find out how that Guruji worked his methods to reach his destination.

Next is Shankar, what happens to him as soon as the story gets over? Was the grandfather narrating a fiction or fictionalized someone else’s tale? The book gets unputdownable when Shankar connects the dots. The novel has been built around celestial weapons – the author has put in a lot of efforts as he has included great Sanskrit Sholakas and knowledge of Indian Mythology runs like banter in the background.

Initially you may feel that the book is about a few people’s life – well that’s the USP when all three seem to be in tandem. Great work! Nimish’s writing style is way unique and superbly aligned with his overall story’s grip. The ending of the book was fetched a bit prematurely; however it has left scope for a gripping sequel.

April 07, 2017
Among all Ruskin Bond books, The Blue Umbrella has, so far, gathered immense applaud from readers and critics alike.  This is a short novel, but the kind of moral lessons it teaches to us are simply overwhelming. This is a story of Binya, a poor little girl living with her mother and an elder brother, Bijju, in a small hilly village of Garhwal. One day while herding her two cows back home, she stumbles upon some city people enjoying the picnic in the valley. She is enthralled to see them well-groomed and rich. She craves to be one like them and among many other things of their, a blue frilly umbrella catches her attention. She begins craving for it. On the other hand, the city people get attracted by her innocent beauty and the pendant in her neck. The pendant consists of leopard’s claw – which is considered a mascot widely in the hills. Binya trades her pendant off with the blue umbrella. The blue umbrella is so much beautiful that soon it becomes a topic of conversation fo
40 comments
Read more

July 07, 2018
The Blue Umbrella by Ruskin Bond is a popular children’s story. It features Binya as the main character, though there are other important characters as well, but the story revolves around Binya and her little beautiful umbrella. The story is widely popular among children, thus it has also been included in the schools’ syllabus all across the country. Since it is often taught in the school, thus the character sketch of Binya is often demanded by students from year to year. Character Sketch of Binya from The Blue Umbrella by Ruskin Bond Binya is the main character of the novel ‘The Blue Umbrella’ by Ruskin Bond. Her full name is Binyadevi. As in the hills or anywhere in India it is a kind of trend to call children with their short nicknames. Binya’s elder brother’s name is Bijju, whereas his real name is Vijay. Binya aged eleven is a hilly girl. She lives with her small family in the hills of Garhwal. Her father died when she was two years of age. For sustenance, the
10 comments
Read more