Book Review: A Passage to India by E.M. Forster

December 23, 2016
The book highlights: what kind of plight possibly takes place between the colonizer and the colonized?


Adela Quested, a British schoolmistress, along with Mrs. Moore, an elderly lady, takes a journey to India basically for two reasons. First was to experience the real sense of India, its people and places and cultural nitty gritties. And the second was to meet Ronny Heaslop, the son of Mrs. Moore, being nudged by her Adela was also looking forward to see Rony as a possible groom for herself.  Initially, things go fine and they get engaged. 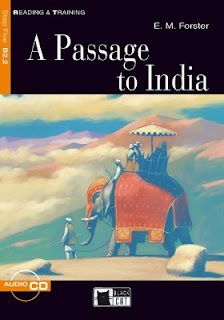 Dr. Aziz, a local but well-respected person, spots Mrs. Moore in a mosque and immediately objects her presence. As the conservation goes ahead, they find that they have begun liking each other and settle into a good subaudition.

Mr. Turton’s house party turns out to be an unpleasant experience for Adela. To make visitors time pleasant in India, Cyrill Fielding keeps a tea party at his house, and on Adela’s request he also invites Dr. Aziz. At the party, the two women get acquainted with Dr. Aziz and Fielding befriends him.

As promised, when Dr. Aziz takes the two women for an excursion in the Marabar Caves, Mrs. Moore terrified by claustrophobia and resonating echo discontinues the expedition. While touring Adela asks him whether he has many wives, disappointed by her comment Dr. Aziz lags behind to compose himself. Heightened claustrophobia instills a sense of disillusion in her mind that she thinks that Aziz tried to exploit her sexually in the darkness of the caves.

Based on her accusation, Aziz is arrested and taken for the trial. Though Mrs. Moor and Cyrill Fielding knew that Aziz was innocent but they prefer not to take his side. Ronny Heaslop holds racist views against the Indians; hence he wanted a prison term for Aziz. When Adela focuses on the cave experience, she fills with contrition, and retracts her accusation. As a result, her engagement with Ronny breaks. Also she finds Ronny a different person since her last meeting and blames the Indian influence for that change.

During the trial period, tension between the locals and the Britishers arise. Through this book E.M. Forster conveyed that the colonizer always taken the colonized for granted, a peculiar feature of imperialism. The book received special attention as it was written and published when in the world imperialism was looked upon as a national interest.