January 07, 2016
Edith Van Hessen was born in 1925, in a prosperous Dutch Jewish family. Edith’s story is a non-fiction book and the narrative springs up from the dairy which she used to maintain during her teenage years and letters she wrote and received during the wartime when Nazis were clamping hard on the Jews of Holland. 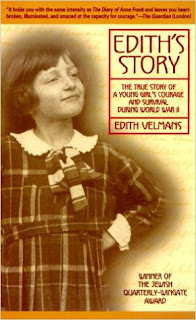 In 1939, she was a popular, 14-year-old, high-school student. Then her life was perfect – sporting events, trips with friends, crush on boys, etc. However when the Hitler-led Nazis invaded Holland, she could not apprehend the future would be dented. For this reason, she is somewhat considered stupid as she could not see the approaching danger for herself and her family. Nazis didn’t round up the Jews of Holland all at once, it was done in a process, step by step, they were expelled from schools, stopped to meet non-Jewish people, and later on were made to transport, on plausible excuses, to concentration camps.

Though her father had excellent connections in the USA, to escape, but the family persisted to stay as the grandma was from Germany, but she was stripped of the citizenship being a Jew. There were many people who could take care of the ageing grandmother if they were to leave for the USA. Unfortunately, they missed the chance and the ramifications were staring straight in their faces. Also the older people in the family failed to tend their health. The father died alone in the hospital, with no family member around him. Edith had two elder brothers as well. The eldest one, Gus, moved away and joined the US army. Second brother joined the underground movement but could not survive the wrath of Nazi camps.

Right under the nose of Nazis, Edith escaped to join a protestant family and worked as a maid at their home in the guise of gentile. She remained hidden for three years and it was heartbreaking that she heard news of her family members’ death, one by one. After the war was over, she was reunited with Gus. Out of six family members, only two survived the war. Edith sounded so spoony during the pre-war time but as the time changed she immediately had to grow up to turn out to be an extraordinary girl of courage and optimism. As Edith shares every harrowing account with the readers, it is a sad and heartbreaking tale of a family that was caught in the Holocaust crossfire like millions other.


The story, like many other books in the holocaust literature, isn’t about loss and death but also about humanity and courage and it is going to stick with readers forever.