November 03, 2015
Three siblings live happily in a well-decorated big house in London. When they go to school, their mother writes stories for when they return she reads the same to them. Their father, who works in a Foreign Office, also loves them. One day two men come and take their father with them. And soon their father is imprisoned on the charges of spying. 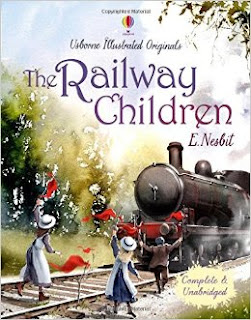 As the things turn untoward for them, the three children along with their mother shift to a countryside house in Yorkshire. Their new home is musty and has three chimneys; also father is away since the responsibility of taking care of the children ultimately falls on the mother. She writes stories for magazines and newspapers editors, sometimes they get rejected and many a time if they are selected their mother treats them with special buns.

The house is nearby a railway station and due to financial constraints children do not attend school anymore. Hence, to while away their time they have befriended the station master and an old gentleman. From the station master, they discover the train timings and accordingly reach at the station area to wave at the trains, except one train which runs late evening.

Unlike their previous home, this home is cold and damp and to keep it warm they don’t have coal. For, their mother cannot afford that. So, she says to children that now we are poor. Children understand their change of social status and do not press her for things which they were accustomed to, rather they help her and also in the time of her sickness they tend for her health and also manage to arrange some medical aid.

Peter, the second child, steals coal from the station yard with the help of his sisters. However when Peter is caught by the station master, he denies considering it as a theft because he knew he was forced to do that to meet his family’s needs. Next, his two sisters come to rescue him from the hands of station master as he was planning to hand him over to the police.

One day, after a slight earthquake, there accumulates a heap of debris of rocks and trees on the railway track. The trio when see the approaching train, sensing the danger if the train is not stopped well in time then there can be a dangerous accident. The girls doff up their red petticoats and make a flag, which sends the strong signal of danger ahead to the approaching train. As a reward for averting the accident, they are presented with gifts by the same old gentleman who lives nearby their musty home. And the same gentleman, when learns about their father’s absence, probes an investigation into the case. Consequently, the father returns home absolved and the family reunites.


The Railway Children by Edith Nesbit is a delightful book for children. Before getting published collectively as a novel in 1906, it was first featured in The London magazine in a serial form.