When the book opens, the time is 1950, and the people of Sicily Island are living in destitution and dying of starvation. They have no proper access to food. They buy food from the black market because mafias for their personal gain influence the legal distribution system. 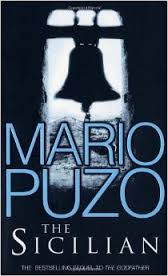 Michael Corleone is on an exile in Italy. But his time is about to end and he may go back to America soon. But as per his father, Vito Corleone’s agreement with Don Croce Malo, the boss of all mafias in Sicily, Michael Corleone is given a task to send Salvatore Guiliano to America and also to take hold of the testament prepared by Salvatore Guiliano, as the testament is critical and capable of tarnishing the image of many prominent politicians of Italy and will also dent the influence of Don Croce Malo.

Salvatore Guiliano, also known as Turi, a celebrated bandit and hero to the Sicilian people, refuses to escape to America unless his pregnant fiancée, Justina, reaches there safely and sends positive acknowledgement.

The book goes back to 1943 September, of Sicily. One morning Turi and his best friend Aspanu Pisciotta travel to Corleone. From there, they are bringing good food items for the engagement of Turi’s sister. On their way home, they are stopped by corrupt policemen, as they refuse to hand over the ration stuff; consequently, Turi is attacked by a sergeant’s gun. Turi in full retribution manages to kill the attacking policeman. So to help him, Aspanu takes him to a monastery where Turi is healed and cared by the monks. At the time of discharge, he vows to take the roads of banditry so as to bring justice for the poor people of his town.

When they reach their village, they are already wanted for the murder of the policeman. While escaping from the village they exchange some gun shots with the police chasing them in which they unintentionally kill some of the policemen. They run away to the Cammaratta Mountains.

Bellampo Barracks hold many innocent people of Montelepre as prisoners. In the process to set prisoners free, Turi confronts with Corporal Canio Silvestro whose pistol fails to shoot Turi point blank. However in a gesture of mercy, Turi lets him go. Among many prisoners set free by Turi, Passatempo and Terranova join his band.

After some time, frustrated by the military, Corporal Canio Silvestro joins the band of Turi. To prove his loyalty, he is given a task of killing the local barber of Montelepre who informs on Turi. After killing the barber, they pin a paper on his dead body which reads: "So die all who betray Guiliano".

As the popularity of Turi increases, so his enemies add on. Don Croce Malo appreciates the bandit Turi and plans to make him as his heir, but it is Turi who refuses the offer since he deeply hates the mafia world. To bully the don, Guiliano kidnaps the Prince Ollorto and the ransom amount is being paid by Don Croce Malo. This event creates a fierce rivalry between Turi and Don Croce Malo, who begins devising plots to outpace Turi, and for that to happen he bribes some of his best men.

Turi hates the ideology of Socialist parties; hence on the terms with Don Croce Malo, Turi campaigns the Christian Democratic Party. Though the Christian Democratic Party wins the elections, but looses many seats to the upcoming socialist parties. This angers Turi, and to celebrate the socialist parties win people will parade through the mountain passes, thus to suppress their celebrations Turi orders Passatempo and Terranova to shoot over the heads of people but Passatempo’s men instead shoot at the people as a result many innocents die. Later, Turi executes Passatempo since he was bribed by Don Croce Malo.

One morning when Michael Corleone and Clemenza are on their way to meet Turi, then they are stopped midway only to hear about Turi’s death. Rumours have it the police have killed him. But in truth Aspanu Pisciotta, Turi’s childhood friend, has killed him. Don Croce Malo has bribed Aspanu. Later in the jail, Aspanu is poisoned to death and a note is found in his pocket stating: "So die all who betray Guiliano".


And Michael Corleone returns to America with the testament.