The Crown of Vijayanagara is book two in the Krishna Deva Raya series. It’s a riveting historical novel set against the medieval period in South India. It can be read as a stand-alone novel. However, it’s advised to brush up the basics of its first book, ‘The Boy Who Would be King.’ In the first part, the lead character Krishna proves his warrior prowess to take over the empire as an able King of the Vijayanagara Samrajya. Though it was a coupe and mutiny, yet it worked for him and the mass of the kingdom was pleased with his endeavors to keep them safe and happy. 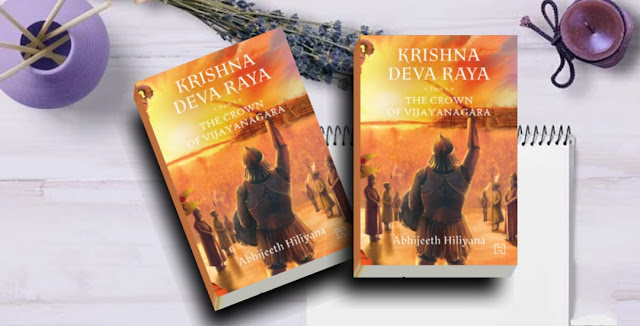 Book two is more about how the new King performs and manages the chores inside and outside the court. The story also follows the development of his personal life and ambitions that he longs to fulfill with his family members. As the novel commences, you will feel that the entire Vijayanagara Samrajya is safe and happy. However, its old enemy Bahmani, though not so powerful now, still leaves no opportunity to invade if found a loophole. Other than that there are great number of ministers and Nayakas taking care of rebels and skirmishes posing challenges to the empire’s unity.

As the novel commences with its optimum speed, many ministers and well wishers urge him to stay away from any direct battle. However, as the situation at Adoni looks delicate, he gears to confront the fierce enemy Yusuf Adil Shah.

With time the leadership strategies of Krishna have changed, instead of ensuing sanguinary battles, he loved to study his enemy and then move and strike accordingly. He did the same with Yusuf Adil Shah. The enemy left much of his power of ration and army at some other place and Krishna sensing this created a semblance of attack. He simply won without losing much of his men. It was not a fierce battle but he was awarded with a victory of Raichur, which was always a bone of contention between the Samrajya and Bahmanis, savings thousands of people’s lives in one master stroke.

As the story progresses, it opens up quite a number of inside arteries. One such classic tale is inclusion of Ramakrishna in the court. Next, Krishna disguises as a simple man to feel the vibes of his people, the coverage on marriage tax was brilliant and insightful.

As the king Krishna grapples with state’s issues, he also feels low on confidence and ambitions and like a typical ruler he fears for his throne. His relationship with Appaji and Ramaraya is robust. However, people begin plotting against him, including ministers from the ruling list. His son-in-law Ramaraya holds an intriguing place in finding out the names of renegades but on the other hand it’s tough to sense his own motives. Ramaraya and the minister Timmarusu grudgingly hold bitter enmity.

The novel becomes a murder mystery towards the end. Krishna worries about the future of his son Trimula. In haste, coronation of his son goes awkward. Many oppose the move of uncertainty. And soon his son is dead by poison. It’s a murder. Krishna loses his calm and personality. Ramaraya brings information of people involved but also manages to incite him against his own old allies. It leads to confusion and the empire looks shaken and shattered. What will be the future of Vijayanagara Samrajya?

It’s another terrific novel by the author in the Krishna Deva Raya Series. It has a substantial storyline with so many interesting characters. If history, humanity, and kingdom tales interest you, don’t miss it any cost.

Buy the novel from Amazon.