Book Review: The Dogfight and the Lone Peacekeeper by Suyog Ketkar

The Dogfight and the Lone Peacekeeper by Suyog Ketkar is a terrific war fiction staged against the 2nd World War epoch. Often world war novels are placed abroad in countries like France, Germany, England…or mainly Europe. However, this one is an untold story from homefront: India. The cause and effects of the war are rooted in Germany and England but a lot of drama, espionage action and adventure takes place in India. 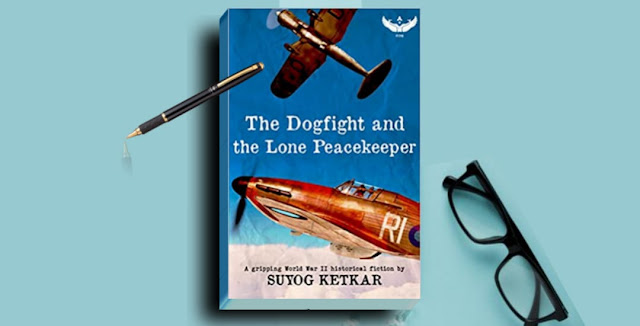 Wing Commander Vasant Kale is posted at Agra airbase. He is nothing less than a star in the Royal Air Force, and a favourite candidate of the Group Leader Boyle. Initially, readers will be loaded with the nitty-gritty of air force mechanism and how these jet fighters communicate and practice. The story develops gradually. For many characters that leave an influence in the story are credited with a good amount of family history. Indianism runs deep in the novel like banter.

When Vasant’s fighter plane was shot down, he is dragged to the hideouts of enemies. He not only recognizes the enemy instantly but also bows to find out the killers of his group people that were murdered cold blooded.

The novel gains an investigative skin as the story shuttles between past and present. Subplots are convincingly built on sweeps, family history, and back stories. A few pages in the book – you may feel that the action is camped within the Indian map. Contrastingly, to put the story on the fringes of holistic hooks, Suyog takes us to the seething German side as well.

The other side of the story features Vincent – one of the formidable characters. He and his elder brother Walter were ideal Nazi-inspired citizens of Germany. Walter was killed while being posted on U-boat 624, which was attacked by the Britain Royal Air Force. Vincent is obsessed for revenge. He invents a chemical weapon. And that fad brings him to India, where he is secretly paving his ways while causing mortal damage to the squadron of Boyle and Vasant. Can someone stop this mad German? Can someone find antidote to the bio weapon?

Though based on true life events but fictionalized, the novel probes deep into the events and the nature of war and offers a peace-loving soldier’s view as how unwittingly a war entraps and affects common people.

The World War novels are mostly a roller coaster ride of emotions, aspirations, obsession, longing, conspiracies and much more. Readers got to see a side of people that they never knew could exist on the face of earth. The good, the bad, the angels, the demons…one comes to believe after reading war books.

The novel holds a substantial plot and storyline, narration is superb. Characters have in-depth portrayal and scenes and settings too are described vividly. From time and again, the author rotates the story from one aspect to another. At times it’s about Vasant’s love affair with Shakuntala, while in the end he discusses the fate of Prabhat’s unwed bride. The novel never drops its social element, which makes the story look totally Indian.

Buy the novel from Amazon/Kindle.