Terry Lister is an amazing brave solo traveler from Bermuda. I have known him through two books as of now. When I first read his book Immersed in West Africa, I was startled to find his unusual journeying through the world’s most rough and ruthless countries i.e. West Africa. I felt sad for him reading his difficult life as a traveler through those countries…but with this book, which is again on four more West African countries, I am sure he has affinity for challenging and uncharted territories. 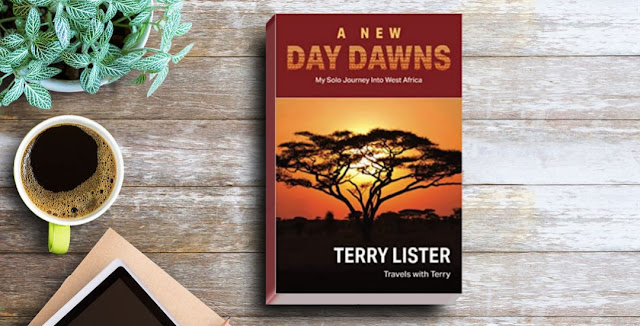 Terry has created a lot of stir with his experience on West African countries among the western reading communities, travelers, and nomads. Being from India, I hardly hear anyone visiting West Africa. It’s like unheard places on the earth. You need to be like them to be there, to manage them, to adjust in their rickety and overcrowded mini buses and cars, and avoiding being scammed all the time.

Facilities in West African countries are below average but a solo traveler like Terry enjoys the first-hand slow journey experience. In his second book on West African countries, he recounts tales of unusual road ordeals, moments of peace and happiness at hotels, keen observation on wildlife, local customs, monuments of slave history, and churches.

In the book ‘A New Day Dawns’ by Terry Lister, you can explore Sierra Leone, Liberia, Ivory Coast, and Ghana. I was bit relaxed this time, as compared to his earlier ventures, he was able to find cars on time, good hotels, easy border checks, and except few places the roads were good. He was delighted to see the rise of buildings that epitomize development.

Much contrary to traveling, a close look reveals that Terry this time explored Atlantic slave trade history from American side and churches with rich history. Terry’s books tell that Africa is changing. Sierra Leone and Liberia have had sanguinary history of civil wars that kept the countries broke for a long. On a plus side, Ivory Coast and Ghana represent the developing side of Africa. These countries are doing well with exports and maintaining peace. In fact, Terry wasn’t scammed or made to cramp in a Sept-Place car in these countries. Though, he was rankled by long hour journeys due to broken transport links. Ghana’s lineage of history with British is mind blowing. I loved the funny side of that golden stool belonged to Ashanti Kingdom that had hurt the ego of English governors and kings.

Yet I could get a hunch that being a tourist in Africa is highly unpredictable and uncertain. That’s why at many instances I found, This is Africa (TIA). If you have got a travelling heart and wanted to tour Africa, this book will acquaint with all basic details, so as what to take care of and what to shed. The entire book is full of authentic information about four West African countries, with pictures. There is a lot that you can learn about that part of the world that is hardly covered by the mainstream media or travelers. Good and bad, Africa makes a memorable trip, for sure. Kudos to Terry!

Buy the book from Amazon/Kindle. KDP members can read it for free as well.