Legally Toxic by Sneha Dhar is a riveting crime thriller backdropped against legal proceedings and courthouse drama. The protagonist of the novel is a lawyer Alekha Srivastav. She is an ambitious person but so far has had handled only petty cases for women and suppressed victims. She is happy with her mentor Girish around her for guidance and practice. 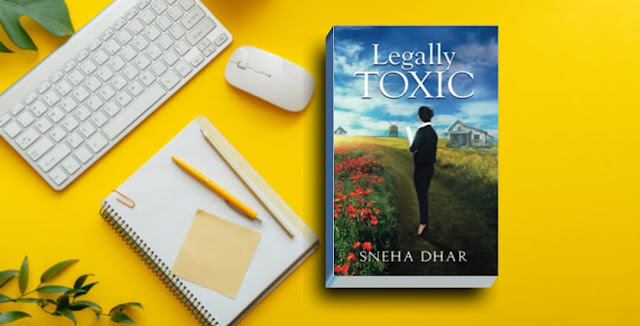 The other side of the story portrays her womanly homely life – an adorable daughter, a caring husband, a fewer friends. Socially, she is well placed. In fact, the novel is not only about chasing the leads and clients, investigating the crime scenes – it rather shuttles between vagaries of life that a working woman has to pass through inevitably. Yet she has to manage all chaos and chores with an equal élan. For instance, her best friend Tami’s husband Akash and Pravesh (her husband) are always cross with each due to some old days hostility. That affects her social life with Tami. The novel cannot pass entirely as a legal thriller; it’s a heady blend of crime, suspense, and a few murder mysteries.

Alekha’s trial for life begins when one fine day she gets a letter from Ramesh, a poor farmer. He alleges that his farm was burnt and his brother killed by the goons of an influential politician. He seeks justice since nobody can stand with him. The letter moves Alekha.

She is out and set to meet the victim. Legal thrillers aren’t straight unlike crime ones. The victim was found under the pressure of Jatin Chouksey – a rich and influential person with having roots in all departments. Jatin Chouksey’s latent antagonism chugs the story in a brilliant matter. At her personal façade, Alekha gets setback for her life when Girish chooses to fight and fend Jatin Chouksey.

Seeing her mentor turning against her is painful but the call of the duty is priority. As you progress with the novel, it turns out to be a multi-layered one. The past deeds of Jatin Chouksey and Hemant, his son, shocks the world at the courthouse.

There are many angles involved in the story when Ramesh opens up against his own wish and fear. Alekha has to do a lot of work to keep everything in the perimeter of her control. The novel is highly readable due to its depth and light language usage. Evidently, the desire to find out what happens next keeps readers turning the pages. Sneha is an absolute master storyteller with her unique backdrop of the story. The novel holds your attention, the plot is good and we are introduced to quite a variety of well-drawn intriguing powerful yet funny characters. If legal thrillers interest you or John Grisham is your favourite author, you ought to try this.