Ramu Upadhaya has been a consisting author from Dima Hasao, Assam. So far, he penned down around 9 books, nearly all fictional. Well, this one is an exception – Assam’s Dima Hasao Pearls of Big River – it’s rather a work of non-fiction that is a tribute, guide, resource, and an important historical journal on the only hill station of Assam. 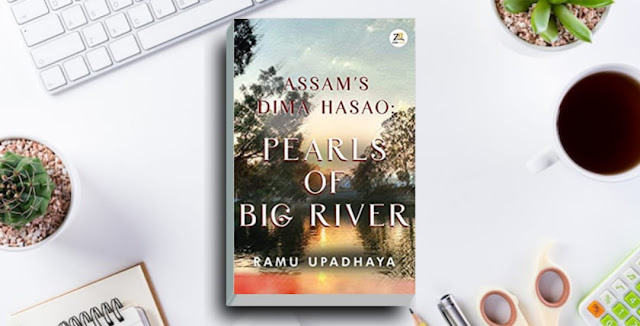 Before we take it ahead, let’s understand some specifications about the title and its relevance. The book is about one rich lineage district of Assam, Dima Hasao. Its earlier name was North Cachar Hills. It was an autonomous district council as per the Sixth Schedule of the Constitution to safeguard the right of tribal people. It’s to be noted that Dimasa is a tribe. The name of the district emanates from it…Dima means big river and Hasao is equivalent to dwelling place. Thus, the title is apt.

The book comes in an appreciable pattern, and easy to comprehend. A work of non-fiction but full of stories of the people who built, contributed, and lived there in North Chachar Hills District since the British Times.

The book narrates the mini biographies of people who set visions, contributed, and shaped the current Dima Hasao. The book also talks about tribes and communities that were initially divided but brought together in the realms of unity. Remembering so many people, their family history, political decisions, and other things to put all in a book is a commendable job, and it shows Ramu’s love and devotion for its people, city, state, and natural resources. No doubt, for this remarkable work, the book galore with forwards from prominent figures of the state.

“One thing I must compliment profusely is the fact Sri Upadhaya has not only written on the personalities, both politicians and bureaucrats, who were considered stalwarts and who have provided leadership and can be described as architects of the district. Sri Upadhaya has also found a place in this thought for leaders who were not at the forefront but worked diligently for the development of the district in their way and they also nursed the same desire and will for the development of the district. This is very laudable.”

After an array of prefaces, the book commences that British chose Haflong to set its headquarters for North Cachar Hills because of its strategic location and richness in natural resources. Later the author introduces places in its vicinity with its people i.e. Jatinga, Bhanjang Hamlet, etc. It sheds light on its locality, living standard, mixed-cultural values, and so on. The first chapter is fascinating due to its natural resource lineage coverage.

As the book progress ahead, it becomes a listicle of people’s achievements that came and went from time to time, like civilizations...leaving their imprint, influence, tenacity, and contribution. But the most appeasing content of the book is the author’s snatches of memories with friends like Prem, visiting a wooden bridge, drinking water at someone else place, etc.

The affair of who was what, who was the first chairman, MLA, MP, execution of that and this – it starts right at the beginning. The book delves in the details with lucid language at its facade. For instance, the first MP hailed from a small village called Nandisa, near Dima Hasao.

At one hand, the author wrote about people who made secular and holistic contributions to the society of erstwhile North Cachar Hills District Council, on the other side he puts his suggestions for better ways of life and development of the area. In nutshell, the book’s objective is to make people of Dima Hasao aware as who did what towards the formation of society and development of the district, which is today heterogeneous and high on harmony and comradeship.