Daughter of Luharu by Monica Sudhir Gupta is a riveting novel that narrates the tale of forlorn fate of women during pre and post independence. The novel is poignant in capturing their pain and tribulation among the patriarchal Indian society. No matter what the women’s contribution is towards a home or nation, they are always treated deplorably. In this novel, we see similar situation where the protagonist Roheeni fights and stands first for herself, then for her daughter and others. Her stance for voice and justice is worth watching and highly appreciative. 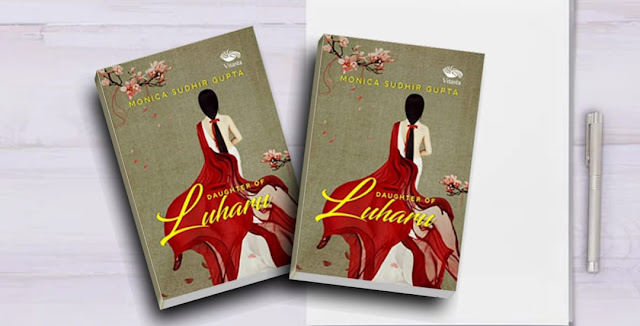 The story begins with eight-year-old Roheeni living in a fictional town Luharu, in North India. The time is before independence. Her father is a rich businessman who hardly has time for her because she is a girl and her mother passed away when she was born.

Soon, she is married off to Vishnu Das in a nearby village Chiriya at the age of eight. The first issue that the novel highlights is the child marriage. At her father-in-law’s home, her life changes, from bad to worst. She is forced to do extreme hard work while tolerating the taunts of her mother-in-law Bhagwani Devi and others. The contrast in mentality between Bhagwani Devi and Roheeni is quite funny and entertaining.

The expanse of the novel is vast and its characters are superbly done with their own idiosyncrasies. Her husband Vishnu Das is educated and peacemaker, he supports Gandhiji but his brother Kishan favours Bhagat Singh. He joins the revolution, often cited as freedom fighter. But things are not easy for them, in their village Chiriya they are chased by police. To save family and prestige, they finally settled in Luharu. Thus, the title is apt, Roheeni finally belongs to her village, even after her marriage. The novel runs high on family drama, political turmoil, melancholy and unabated suffering of women.

The time of 1947 partition was turbulent for the family. With Kishan absconding as a freedom fighter, the house was devastated by rioters. They loot and kill people in their house, kidnap Rani, the daughter of Bhagwani Devi. After the incident, the family is never the same again.

Another interesting climax in the novel is the birth of a Roheeni’s daughter Nutan. She is cursed for a girl child. Further, Roheeni makes sure that her daughter gets good education and marries off to a rational family. However, after the marriage of Nutan, there comes another fight for the family. The marriage was full of horrific secrets. How Roheeni saves her daughter – that is another captivating story in the novel.

Be it pre-independence or after 1947, the situation of women hardly changed. They have to fight for their rights and survival. The author grimly captures the plight of women taken away by rioters during the communal violence. Rani was one such victim. While the whole family is worried about Rani but Bhagwani Devi is reluctant on her homecoming, as per their lineage, she is now defiled and cannot be accepted in the society. They find Rani…but the quirk of fate writes something else for her.

The novel has an excellent story plot, and all its lead characters are women, which makes it gripping. The novel does not reek of feminism but it concerns the suffering of women at many layers in our society. With measured pace and brilliant narration, the novel is a class in itself. Monica’s rich and vivid narration of events and circumstances makes the whole story appealing and visual. By all standards, it’s a great novel with strong message for all of us.