A New Political Ethos: Panacea for Robust Societies by Kanagiri SN Prasad is an interesting political non-fiction book. Right at the beginning the book introduces readers to the national and regional political parties of India. The book is easy to read and understand for all sorts of readers. The expanse of the book stretches from short introductions to history to problem-solving aspects and many in between.  For every party, the author presented first its history, backdrop and the position in the contemporary times. 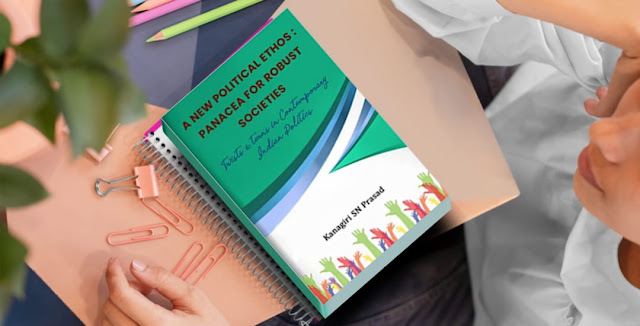 The book commences with the political parties of India where we get introduced to many known and old and new parties like Congress, BJP, CPI, CPIM, The AIMIM, YSR, TDP and much more. Initially, the author puts more focus on South Indian political parties, especially from Andhra Pradesh and Telangana. So, the readers not acquainted with South’s political parties and allies, can definitely gain new perspectives from this book.

It also studies the backdrop, rise, and fall of Congress and includes the roles of Rahul Gandhi and Sonia Gandhi. Later on it also studies the meteoric rise of BJP. The author asserted that those leaders who connected with masses got good results in elections, for instance he eulogizes in that reference is YS Sharmila Reddy. As the book goes down, it also highlights the share of Muslim MPs in the Lok Sabha. There is also coverage on AAP, SP, and BSP.

The author is a keen political observer and columnist with various newspapers. The book is a combination of his published articles and his research done in the field. By explaining about political parties, he also delves into the mechanism of democracy and federalism. Just like our lives have twists and turns, so do the political parties endure their share. Reading this book clears many doubts and can help anyone understand the current landscape of the Indian politics.