The novel ‘Ole Biyer Rupnagar Fredericksnagore’ (Fredericksnagore, the Dream City of Ole Bie) is written by Prof. Asoke Bhattacharya. It’s an outstanding Bengali novel. This book deals with the story behind the formation of Serampore which the Danes used to call Fredericksnagore. The book is divided into three parts but these are connected. The historical importance of this place is prominently presented in this book. Serampore is a town in the Hooghly district of West Bengal. It is situated on the bank of the river Hooghly. Colonisation by the Danes brought about a remarkable change in the character of the township. They founded their ‘Kuthi’ there.  When the city was under the Danish rule, it was called ‘Fredericksnagore’, after Frederick the Fifth (1723-1766). The story begins in the 1770s when Ole Bie first stepped into Serampore. He was mesmerized by the beautiful scenario of this place though he was surprised that this place was far removed from modernization. He took a pledge to make this place highly urbanized during his Governorship. 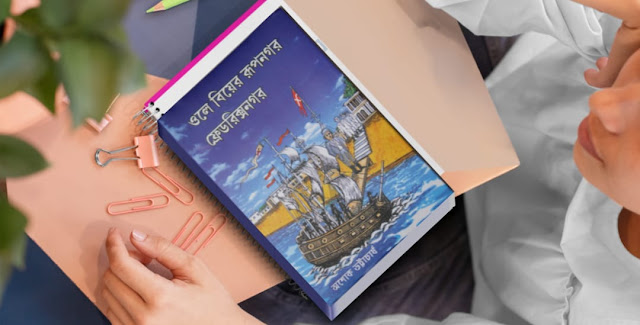 It was due to his dedication and efficiency that Serampore i.e. Fredericksnagore developed into an eminent trading centre. His constant endeavor as well as his co-operative nature encouraged William Carey, Joshua Marshman and William Ward to found the ‘Serampore Baptist Mission’ here in 1800. Shortly thereafter it became renowned as a seat of Christian learning. The author shows how Ole Bie had his dream of making Serampore a splendid urban centre fulfilled. In the novel, we come across the effects of the Great Bengal Famine of 1770 - the ruinous condition of the farmers, traders and the handicraft merchants. The author should be credited for portraying characters appropriate to the historical events; he keeps intact the congruity between the people and the events.

On the other hand, we see how Maria, a domestic help, created a position for herself, in the society; how her advices helped Ole Bie, when he would get into trouble. Though they were both married, they fell in love and married at   an opportune moment.  This duo had assisted the Christian Missionaries a lot. With the help of the rulers of Denmark, they were able to build one of the most eminent institutions   of India at Serampore, the Serampore College, the first University in the whole of Asia. Eventually, the city witnessed major historical events -- the Danish rule, the beginning of the Bengal and Indian Renaissance and the industrial resurgence.

Prof. Asoke Bhattacharya is an inquisitive researcher and a history lover. He has ably presented a not so well-known chapter of the Indian history to the readers. The author has skillfully blended the fictional characters with the historical ones.