Intragalactic Frontier by A. R. Felcita is a riveting fantasy thriller with some elements of sci-fi in it. It is very rare to find a novel with aliens living on earth. Well, Intragalactic Frontier is about survival of Re, Ro, Zo and many other alien species like him. The novel features Frank as a protagonist from the human side, to his company are his doctor girlfriend Redim, and Richard. Though there are some other auxiliary characters also from both sides which cannot be ignored. 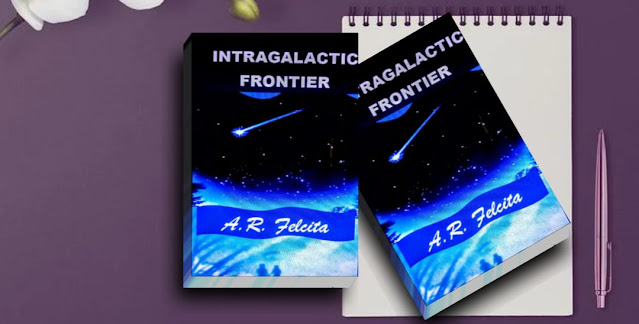 Frank is the only son of a wealthy business man Francis Timothy. They have a business kingdom…but the guy Frank is so down-to-earth that he lives in rural area somewhere 700 kilometers away from Chennai. During one torrential rain and heavy cyclone, Frank comes across a strange species. It is an alien, from some other place, certainly not from earth. He is asking for help from Frank. Reluctantly, Frank goes along with Re (the name of the alien). They are small in size and live in an underground colony.

As Frank develops trust and friendship with them, he learns about them. They have strong powers of communication and knowledge transfer. They are advanced in technology. Their average age limit is 10000 years. They come from space, from some galaxy but on earth they are living in secrecy, as their ancestors erased their memory of roots. They are like orphans. So, they are clueless about their original roots. They wish to go back to their space and galaxy, thus seeking help from Frank. So the novel is about relocating aliens back to their native place. But how is it possible? That’s the rest of the story.

The story isn’t about their search and survival. Rather it also has a treasure angle. When an old man dies brutally, Frank comes to know about the treasure connection and there is a gang that is badly searching for the treasure in the mountains where these alien beings are hidden.

But the biggest challenge in the story is how Frank and his friends will help them to relocate to some exoplanet. Will they find one or is it going to be another dead end for the aliens. But before they find any planet, they have to find the environment like earth as the aliens got used to air, water, in fact all earth-like surrounding.