The Beautiful Sky by Harshwardhan claims to be the longest romance novel in India. Indeed, it is…running over 500 pages, while reading one could feel its expanse and traverse. The novel is built on a powerful theme: love is beyond a common vista and true love demands sacrifice. While reading this novel about Amyra and Vian, you may conjecture that love is also blind and it is not for everyone. 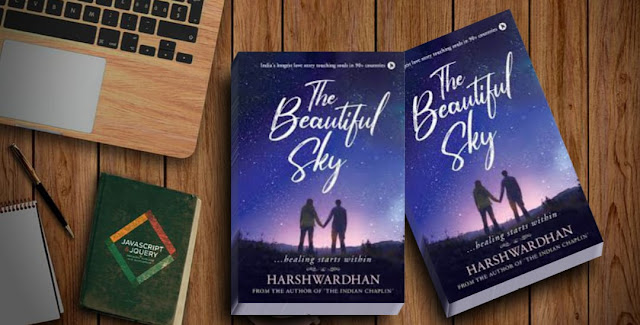 It is one of its kind romance novels. Why? It involves a lot of Hindi Shayaris. In fact, there is a Shayari for every event and situation. Such as;

This Shayari depicts the plight of Amyra when she had to see the court for rape proceedings. Likewise, whenever there is a love in the air, you will find a perfect Shayari forming up in the heart of Vian, the lead character. Or in midway, he would do a Shayari even when Amyra was not around him. The sense of Shayari touches the romantic angle of the novel repeatedly; it seems like a movie scene.

Secondly, a lot of conversation takes place in Hindi – rather this angle makes the book light and easy to read. So, while reading a book of 500 pages, you will be nonplussed to see the language usage of the author. Yes, it is an adult novel with slangs and expletives but it makes it read like a reality show.

At the façade of the story is love of Vian and Amyra. They both were in the same college. Amyra had a few boyfriends before getting hooked with Vian. On the other hand, Vian is stubborn, aggressive yet decent in his own ways. He likes her. After the fiasco of her ex-boyfriend Amit, Amyra comes along with Vian, who is from Nashik but studying in Mumbai.

They both fell in love, like commoners dream of life together and all that stuff. But parents are real mountains. Amyra’s family did not like Vian, as he is not in a job and have a career and all. On the other hand, Vian is into Shayari since college days, writing books. In fact, he gets regular calls from auditoriums and his book also gets on the right track.

But love doesn’t stay the way it begins. Due to family and other reasons, they separate. All of sudden after three years, Amyra, just before her marriage a week before, gets gang-raped and Vian is found there. How? That’s complicated. You will find the reasons inside the story.

The second narrative of the book is that Vian wants to help Amyra post the gang rape. The story now delves deep into the mental wounds of lovers, as how one feels being in rape trauma. Like banter in the backdrop, Vian keeps his head up for his career into shayari and writing. He is into government job but also stubborn to do something unconditional for Amyra. It is the love of yesteryears that keeps Vian moving for Amyra. Also interestingly, the author has introduced some romance novel of Pran which puts an incorrigible sort of influence on Vian. And there is also mentioning of the book ‘The Secret’, so Vian thinks that whatever he is wishing will come true, as the whole universe is conspiring to get that for him.

In fact, the novel holds many concurrent layers of story. It’s not one-sided story, it will keep the readers entertained and enthralled for long time. The novel shuttles a lot between timelines of 2014, 2016, 2020, and 2021…

Beyond an extraordinary love story, the novel also sheds light on unconditional love and healing. The author has special care to show how a gang-raped victim can be healed. The coverage of Vian helping Amyra is really inspiring and great.

There are many characters in the novel; however, Vian stands tall among them. He is good, flawed but his amateurish stubbornness steers the novel pell-mell. Overall, it’s a good novel with a strong focus on unconditional love. The writing is engaging and lucid. It is an impactful Hinglish romance novel.