Niranjan the Bomb Buster by Major General Bipin Bakshi and Rishi Kumar is a riveting graphic comic on Lt. Col. Niranjan, who was an NSG commando. The comic is based on a real life story. This book highlights his role in successfully carrying out the Pathankot Airbase Operation. 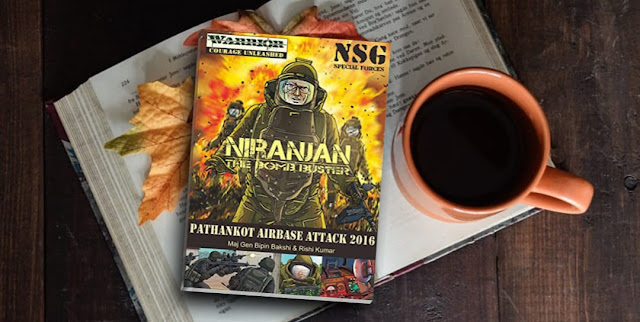 The story is of 1st January 2016 when NSG team got information of Pakistan sponsored terrorist attack at the Pathankot Airbase. The team led by Lt. Col. Niranjan heads to Pathankot. There the army and police have to neutralize the rats (terrorists) and after that NSG will sanitize the area by defusing the explosives attached to the terrorists.

It’s an inspiring comic with vivid pictures. The aim of the book is to make aware people of this country as how our soldiers fight without caring for their life and family. We all have heard and seen news coverage of the Pathankot Airbase attack on various platforms but hardly anyone knows the sacrifice of Lt. Col. Niranjan. Lest he is forgotten as one of the unsung heroes in the history of military operations, Major General Bipin Bakshi (a prominent army personality) presents this book on a right time. The comic is full of activities and colourful pictures. One will have a good time reading it yet tears of gratitude fill the hearts. The story inside shows the bravery and valour of our armed forces. A highly recommended book for our citizens.

Buy the copy from Amazon.