Book Review – A Higher Conversation: Another Way to Be Human by Neil David Chan

A Higher Conversation: Another Way to Be Human by Neil David Chan is a blend of philosophical and spiritual approach, doling out too much info on self-knowledge and care through the conversation with the soul. The quest in the book is to speak to soul to feel aspects that tend to lag behind when we consider only our body and mind. 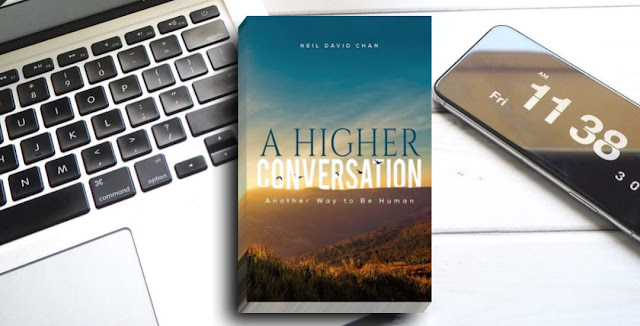 Over and again, Neil reminds us that to lead a meaningful life we have to consider body, mind, and soul in tandem. If they are not together, it is called broken relationship with oneself. Our body and mind gives us experience but soul gives us feelings. Soul is a metaphysical thing – it is not visible to us – thus we do not consider it when making decisions. On the other hand, body is a physical entity, plus it’s guided by mind (which is another metaphysical thing), hence we are always inclined towards body-mind combination. In fact, the combination should be like body, mind, and soul.

Most of the concepts in the book are explained with regard to physical and metaphysical state. Things that are physical, for them we initiate face-to-face conversation, and rely on them. But to be that highly evolved being, we need soul as well. We cannot keep ignoring it. In the world everything is broken and separate due to lack of involvement of soul. The man’s relationship with the planet, everything, even himself is broken as it tends to classify and separate things than uniting them.

The book offers food for thought and raises concern of unity. It also talks about 8 ancient civilizations that diminished because they didn’t heed on the combination: Ancient African – 3000 BC to 1000 AD, lasted for 4000 years, Mesopotamia Empire lasted for 1575 years. He means to say that the current civilization of modernity and Internet may end up in 1000 years like others.

The author’s take on racism of black and white is interesting but sounds fictional. He is of the opinion that once the planet was abundant with black people, as they moved out in Tundra or higher regions and their skin colour changed. He justifies the theory with example of Africa. Similarly, there are other issues discussed in the book that tell the tale in an otherworldly fashion.

Neil’s analogy and references are of robust quality. He brilliantly explained disillusion and how to reach out to next level like we do in a video game. Also discussion on separation and possession and disease are soul stirring. The book not only gives important preaching on perfect combination but also provides insightful on our current existence. As a human are we really doing what the nature demands or too busy in self-indulgence? The book tries to re-evaluate the value of a human birth. This is a great book that will, for sure, motivate millions to find themselves and experience their inner growth. A highly recommended book to those who enjoy reading about spirituality, human existence, and the overall well being.