Raising Hell for Peace by Shashi Bakshi is more than a political thriller novel. Stretched across a long timeline and set in different countries with a good cast of characters, this novel sums up exactly what’s going in the world today. The book deals with the events that stage the performance and life of political parties in India, and elsewhere. 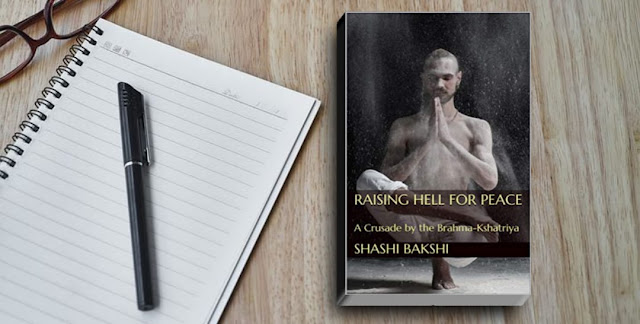 The story, when starts, looks like it is going to be a mythological fiction in a contemporary time, because initial chapters focused more on Kalki – the tenth avatar of Lord Krishna in the new era. The story starts with Guru Satyanand from ‘The Indo Aryan Pride Organisation’ (IAPO). He sets one detective to find out the birth of a baby that is potentially a Kalki. The detective manages to find one boy. The IAPO takes care of him, names him Deshbhakth. After Guru, Balraj takes care of the boy. Desh is bestowed with a privileged life. He gets into in IIT Kanpur.

The ideology of IAPO for India is to make it a majoritarian country. As the story chugs ahead, Desh proves to be a normal guy. Though active in politics, he looks lost in the milling crowd. During college days, Desh and Arya were good friends. Later on Arya moves to the USA for higher studies.

The blurb of the book may suggest that Desh is the leading character, however, a close look reveals otherwise. It is Arya – he wants to change the world’s political order for peace and harmony. He loathes things that cause hatred and riots and turbulence and kills millions of innocent people. But why? There is a reason for that.

While Arya is away in the foreign country, Desh becomes the CM of UP twice. When Arya comes back to India to meet Desh, things change and the novel picks up speed. Hereafter the novel becomes quite political in its stance. Readers will be surprised to know what churns beneath to win an election. The author also, simultaneously, considers the political landscape of Russian and the USA and how does it affect India and other countries. It was shocking to know that Pope of Vatican involves in big election and how things go berserk if not materialized properly. The novel is not one-country focused. It rather collectively tries to study three to four countries. The novel is a perfect political thriller. Some of the events and circumstances in the story mirror the political agenda of the current Indian government, it ossifies when the author brings CAA, NRC kind of stuff in it. The novel might have tried exploring the underlying theme but it certainly landed up disturbing people who support right or left wing politics.

The novel is thoroughly enjoyable with full of political insights. Characterization of Donald Smith was superbly done. The ending of the novel was way great, on the terms of karma. Overall, it is a fascinating read for its genre. All the characters, from Arya to Kat or that manipulative Julius – they never bored. They were perfect as per their roles and virtues.

The author is a keen political observer. His knowledge about the politics is evident in the book. On the whole, the novel is a wonderful read. Yes, at times, it looked that the story was going off the track but the author converged everything brilliantly in the end. People who hold neutral views on politics can thoroughly enjoy this novel. Fingers crossed for supports of any wing!

October 01, 2018
Poem by Rabindranath Tagore: Where the mind is without fear and the head is held high Where knowledge is free Where the world has not been broken up into fragments By narrow domestic walls Where words come out from the depth of truth Where tireless striving stretches its arms towards perfection Where the clear stream of reason has not lost its way Into the dreary desert sand of dead habit Where the mind is led forward by thee Into ever-widening thought and action Into that heaven of freedom, my Father, let my country awake. Short Summary: This poem is written by Rabindranath Tagore during pre-independence days, when India was a colony of the British. The underlying theme of the poem is absolute freedom; the poet wants the citizens of his country to be living in a free state. According to the poem, we see that the poet is expressing his views there should be a country, like where people live without any sort of fear and with pure dignity…they should
8 comments
Read more