Book Review: The Quantum Reality of Life by Saravanan Marimuthu

The Quantum Reality of Life by Saravanan Marimuthu is part research work, part philosophy. The book takes stance on reality and existence and how they are interrelated by studying science, religion, and spirituality. The book is easy to read but hard to grasp the real meaning of the content. For example, this excerpt from the book sounds simple but its underlying meaning is far beyond the comprehension of a layman. Here it goes: 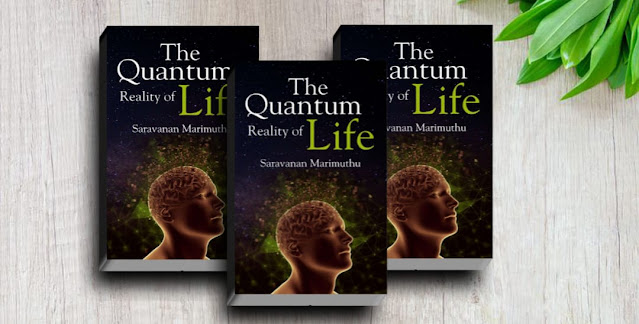 "As per Quantum Mechanics, Reality is recognized only through an observer. But does this define that without an observer, there is no reality? Is reality subjective? If we postulate that an observer is only a witness to the reality and nothing more, why would the late observer be bothered about reality existing, where he does not exist? So either the existence of reality is relative to the existence of an observer or not, it is confident to say that reality only matters to the observer when they exist to experience it."

If I read the above content thrice, I get the meaning that existence and reality are directly proportional to observer. I know that observer creates the reality in his mind. But my question is what if the observer is just imagining the reality of some other place where he never gone. Likewise, there are more chapters that not only clear the fog but also tries to rationalize the logic that Quantum Mechanics presents.

Broadly, the author with this beautiful book tries to seek the interdisciplinary relationship between science, religion, and spirituality. And these three aspects can come under the unifying lens of Quantum Mechanics.

There are good concepts present in the book about the existence of god, soul, evolution of man, and universe. Among all, I liked most about the source of universe – as how and when universe created – what's its source. As we humans belong to universe, so where does universe belong to.

Get your copy from Amazon/Kindle.