Bare Chest on Everest by Jay Vikram is a thrilling novel staged against the beautiful backdrop of Nepal. The story features three bold and badass men: Jay, Tobias, and Chris. Among all Jay is the youngest one, thus, he is also a sort of protagonist in the novel. But the storyline seems equally divided among these three men. They hail from different countries, Jay from India. Chris is a photographer, and Tobias and Jay are sort of consultants roaming the world. 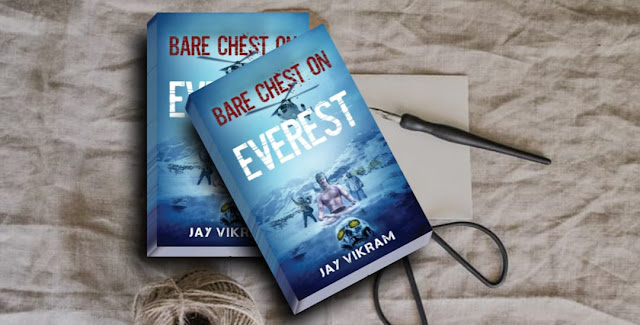 One odd day Jay gets a message from Tobias about climbing the base camp of Everest. The protagonist reaches Cat Man Do (Kathmandu) to join the team. When these three men meet in Kathmandu, the narration and pace of the novel is charged with amazing momentum. Ironically, the trip is not simple as they thought initially. Difficulties begin pouring as soon as they come out of the Kathmandu airport. The novel is divided into two layers – first is how they struggle at each step while climbing up – second is the mystical element that almost threatens their lives.

As the story picks up, readers will find that Jay and his team are enjoying the trip but getting irritated by weather and lack of basic amenities in Nepal. The author has weaved a powerful yet adventurous story. In snatches, there is a lot of philosophy that goes like banter in the book. At times, the same philosophy looks like a motivational factor for Jay and others when they feel numb and cold and totally exhausted.

The narration is humorous and so witty that at one point of time readers may think it as an adult novel. But the liveliness in description of events, customs, and weather is a way captivating and readers might feel as they are with them. Pemba, donkeys passing over the makeshift bridges, Sherpa beer, NPR, lodging discomfort, helicopter plight – at every turn of the page the author make us realize that we are there, with them climbing the world’s tallest mountains.

At façade the novel may look like an adventurous one based on just Everest climbing, however, a close look reveals something else. The guys, later in the story, are bamboozled by monks to perform one ritual that can eliminate a mountain demon. The curiosity builds right from the start of the novel – one might think of reaching the ending excitedly – but we would recommend you to savour this book in your own pace.

The pace of the novel is measurably fast, but, at times, the writing seems long-winded and complex. Despite that the author kept the total focus on the journey and its allied adventure it enthuses in the story. The story is beyond the mountains of mighty Himalayas of Nepal. There is a smuggling angle involved…there is mystic angle along with demons and monks. Pick up the novel to find out the truth behind their journey. Will they be able to complete the journey and their purpose?