In Mildred Bowers Armstrong’s poem ‘The Squirrel’ is a beautiful composition where the poet describes the playful and exquisite nature of a squirrel in a simple and joyful manner. This poem has been covered in the NCERT Class 7 English Textbook Honeycomb. 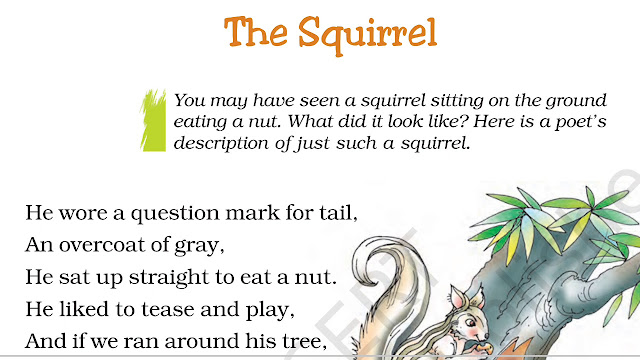 He wore a question mark for tail,

An overcoat of gray,

He sat up straight to eat a nut.

He liked to tease and play,

And if we ran around his tree,

He went the other way.

The first stanza begins with the physical description of the squirrel. The poet in her imagination sees it as if it's wearing "an overcoat of gray," for it has gray fur all over its body with darker stripes. Its tail rolls about, twisting like a question mark. The poet also describes the food that the squirrel is fond of, it enjoys nuts and sits straight.

She is attracted by its swift and joyful movements and there is a hide and seek game going on between her and the squirrel. The moment she gets too close to play around it, the squirrel gets immensely shy and runs away in the other direction.

Our nature can be very fascinating, and so can be the creatures of nature. Only if we could realize that like the poet here who was overwhelmed enough to observe and dedicate this small prose to a wonderful little squirrel.